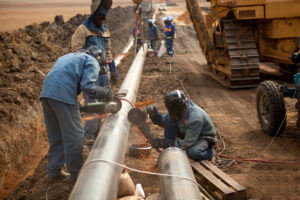 I frequently find myself running across headlines that are eye catching and definitive, yet when I read through the article under the headline a different story gets revealed. In some cases a key piece of information is omitted, buried, or minimized. I imagine that there’s been studies that examine what percentage of people actually read […]

Courtesy of the CTV, comes this useful update on the current status of various efforts to connect the oilsands in Alberta to tidewater. Keystone XL, of course, was rejected by President Obama in November 2015. That decision is being appealed. There are three high-profile projects within Canada, as well: Northern Gateway (to Kitimat BC): “The […] In the last few decades — indeed, in just the last few years — a combination of demand and technology has greatly expanded the amount of oil and gas reserves that can be economically extracted. Unfortunately, cars and industry can’t run off crude oil anymore than freshly-fracked methane, so those raw hydrocarbons are essentially useless until they’ve undergone a myriad of available processes to refine them into useable fuels. The whole reason for the Keystone XL pipeline, after all, is to bring heavy Canadian crude down to the Gulf Coast for refining.

A little over a year ago, The Wall Street Journal reported that American refineries — already the largest in the world — were pushing to increase their capacity at their existing plants, while others energy firms were trying to get into the business, often at a small scale. The results sounded impressive:

American refiners are set to add at least 400,000 barrels of oil-refining capacity a day [current world-wide refining capacity is about 17 million barrel per day] to existing plants between now and 2018, according to information compiled by The Wall Street Journal and the consulting firm IHS. That is the fuel-making equivalent of constructing a new, large-scale refinery.