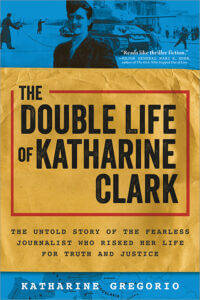 Katherine Clark was an investigative reporter active between the 1940s and 1960s. She was the first female Allied war correspondent entering Berlin in 1945. Her 1950s beat was Eastern Europe. There she spoke truth to power, what investigative reporters are supposed to do. But she spoke the wrong kind of truth about the wrong kind of power. So, unlike those widely lionized today, like I.F. Stone, Clark has been allowed to be forgotten. Until now.

“The Double Life of Katharine Clark: The Untold Story of the American Journalist Who Brought the Truth about Communism to the West,” by Katharine Gregorio, brings Clark’s biography to the attention of a new generation of Americans. What a story it is.

Gregorio focuses the story on Clark’s Eastern European years, when Clark covered anti-Soviet uprisings in Poland, Hungary, and Czechoslovakia. More importantly, it reveals her efforts on behalf of Milovan Djilas, one-time vice-president of Yugoslavia. An ardent Communist who became disaffected with Communism, he was stripped of his position and the privileges and power that went with it after speaking up against its totalitarianism.

No US Troops in Ukraine, Thank You Very Much
Jon Gabriel, Ed. · 24 Likes

What is at stake in Ukraine? What’s an acceptable outcome and for whom?
Zafar · 13 Likes

Quote of the Day – Who Benefits?
The Ricochet Audio Network