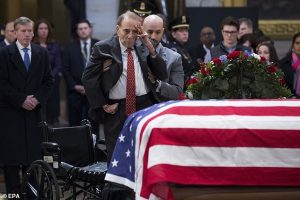 It came as a shock. It shouldn’t have, the news that former US Senator and 1996 GOP presidential nominee Bob Dole, 98, passed away on Sunday. It falls on the same day three years ago that he famously but painfully stood in the Capitol Rotunda and saluted the casket of his former political competitor and close friend, George H. W. Bush.

Brilliant and touching prose from prominent people who knew him well or shared parts of his incredible journey and life story are rolling in. Of course, it will be positive, even glowing, and deservedly so. I can imagine Senator Dole, with his famous humor and dry wit, asking “Where were you in 1996?” That’s when he unsuccessfully sought the presidency as the GOP’s nominee, losing to incumbent Bill Clinton. Tributes are already pouring in from his friends, former colleagues, ex-staff, and the beneficiaries of his legendary military, legislative, and public service record. Mine is but a small addition, but we all have our stories and desire to honor his towering legacy. Together, they present a glowing mosaic of courage, determination, compassion, humility, and service.

And yes, humor. He could have easily succeeded as a stand-up comic. As one of a few senior GOP staff would attend occasions closed-door meetings of the Senate Republican Conference, he would often lighten the mood with endless quips, delivered within his famous deadpan style and impeccable timing. Celebrating US Senator Strom Thurmond (R-SC) on his 93rd birthday, he quipped, “I watch what Strom eats. If he eats a banana, I eat a banana.” Thurmond would live to be 100, six months after retiring from the US Senate in early 2003. He was succeeded by Lindsey Graham.

History is more spiral than circle or line, with old things getting new twists. So Georgia in November 2020 is the focus of efforts to change national policy by partisans moving in large numbers into the state for the purpose of determining state election outcomes. We are piously assured by the purposely ineffectual election officials […]

No good martinis but plenty to talk about today!  Join Jim and Greg as they dissect Republican fears that the open U.S. Senate seat in Kansas could be at risk this year if primary voters nominated Kris Kobach, who lost the 2018 governor’s race there.  They serve up a double-barreled crazy martini as Utah Sen. Mike Lee fumes that Wednesday’s Iran briefing offered few specifics and that national security officials told lawmakers not to debate the issue in public. But they’re also surprised to see Lee planning to channel that frustration into support for the War Powers Act revisions restricting the ability of a president to order time-sensitive military action.  And they have a lot of fun as House Armed Services Committee Chairman Adam Smith tells CNN that its time for House Speaker Nancy Pelosi to deliver the articles of impeachment to the Senate only to go on Twitter a short time later to say he “misspoke” and whatever Pelosi wants to do is fine with him.

Ian Tuttle of National Review and Greg Corombos of Radio America enjoy waching Democrats snipe at each other, as liberals blame the national party for not doing more to win the special election in Kansas.  They’re also a bit dizzy from President Trump appearing to shift positions on Chinese currency manipulation, the Export-Import Bank, Federal Reserve Chairwoman Janet Yellen, the relevance of NATO and more – all on the same day.  And they slam students at the University of Notre Dame for complaining it won’t be safe there when Vice President Mike Pence gives the commencement address next month

Apologies for the delay in posting this week’s college football thread, but it’s been an unusually busy few days at the LaRoche estate in the Texas Hill Country. As it happens, my Texas Tech Red Raiders have already played today, defeating the Kansas Jayhawks 30-20 on the road in Lawrence.  It was a game filled […] Sam Brownback is a solid Conservative on both the economic and social side of things. He is governor of Kansas who is up for re-election this November. He is also under siege from the very party he represents and the Leftist fringe who believe that the economy is the government. During his term over these near four years, he implemented one of the most ambitious economic programs since the Reagan Revolution. He orchestrated a plan that was put into action in January 2013 and the difference between the numbers of 2012 and 2013 could not be clearer. His plan included tax cuts, dissolving government bureaucracies and slashing regulations on businesses. It is because of this that the Left has taken to point to Kansas as a “Conservative Hell.”

Those were the words of John Judis. He is a very left-wing writer who has hopped around between The New Republic and The Atlantic. His latest hit piece on Gov. Brownback can be found in The New Republic and it is chock-full of hand-wringing over things that simply are not true. Judis laments “Brownback established an Office of the Repealer to take a scythe to regulations on business, he slashed spending on the poor by tightening welfare requirements, he rejected federal Medicaid subsidies and privatized the delivery of Medicaid, and he dissolved four state agencies and eliminated 2,000 state jobs. The heart of his program consisted of drastic tax cuts for the wealthy and eliminating taxes on income from profits for more than 100,000 Kansas businesses. No other state had gone this far.”