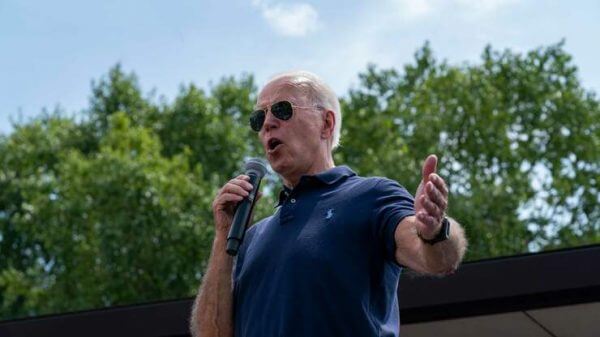 In one of his most well-known slippery statements, President Biden stumbled onto something unusual: a genuinely worthwhile observation. To be more precise it was a distinction, and, if only the man knew how to throw together a sentence, it might’ve stuck. Granted, it would have been a lie. But, irony aside, I’d almost have been moved to salute it. As things stand, the not-so-mildly contemptuous defense that follows is the best I can do.

“We choose unity over division. We choose science over fiction. We choose truth over facts.” He said it, a few attendees whoo-ed! (How I wish people “whoo-ed” less.) Then he just skipped along to addressing his “folks” and blah-blahed his way to a pitch about joining him, which he naturally prefaced with an, “If you’re interested…” Yeah, his speeches are about as bad as the feathery pillow fights of interviews, co-starring a weak press. But Biden and his brigade of blathery buttheads know what they’re selling: fax machines…. in the age of the internet.

Yes, it’s true. I’m very glad though that it is still clearly spelled out in the Declaration of Independence that it is my God-given right to do so.

Thomas Jefferson apparently never explained why he explicitly called out this particular right, although according to this site, he was most assuredly influenced by George Mason’s Virginia Declaration of Rights. I always thought it was a very human touch to assert insert happiness into such an austere political declaration. And I always thought it a brilliant touch to say we have a right to pursue happiness, but not a right of happiness itself. In that way, the Declaration differs actually differs from the Virginia Declaration of Rights which includes “the enjoyment of life and liberty, with the means of acquiring and possessing property, and pursuing and obtaining happiness and safety.” So in Virginia, they have to right both to pursue and obtain both happiness and safety. I’m glad that Jefferson decided to leave out the obtaining and the safety part. The right to pursue safety is rather baked into our DNA and sorry, Mr. Mason, our Creator did not guarantee that we would obtain either. In this way, our brilliant and spare founding document differs from so many modern declarations of human rights which make declarations of tangible things that people should be given if they don’t have them: food, clean water, shelter, health care. And now, apparently, the right to go through life un-aggrieved.

At some point in the near future one or the other of my grandchildren will have to do that project known as Shoreshim — “roots,” or family history — and I will have to provide some raw data and photos and mementos. For the ones who live in New York, this is somewhat less of […]

From the parking garage at the Tampa airport, I could see palm trees silhouetted against a sky streaked with orange and pink. I thought about outings to the Gulf, sandy soil, green lawns, and my grandparents’ quiet, air-conditioned house. I was far away from the Montana winter that was beginning in earnest. We found our […]

What are you sensing around you as we land on the end of this month and spiral toward the end of the year, the end of the battle for the presidency? Seems everything is on fire . . . .  I apologize to Frost and appeal to your forbearance for my usurping and distorting his timeless powerful poem […]

If you were listening to Top 40 radio in 1968, you probably heard this song 100 times: Preview Open

The Raid Heard ‘Round the World
Rodin · 22 Likes