Have you ever seen the 1973 movie The Paper Chase? The movie is, among other things, about the rigors of law school. In the movie, the students live in fear of being interrogated in front of their Contract Law class by the legendary and demanding Professor Kingsfield. Below is a clip from the movie which shows this process in action (it’s about three minutes long).

My favorite Supreme Court Justice of all time is Clarence Thomas, for his courage in sticking to his principles, despite knowing they are unpopular with the tastemakers of the day, no matter the consequences. This courage was a deliberate decision by Thomas. In February 2001, he gave a speech at the American Enterprise Institute outlining […] 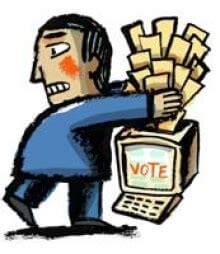 Before you know it, we won’t need Congress at all; we’ll just have judges make the laws in this country.

Apparently judges all over the country have decided that they are empowered to create or change election laws. After all, they are demonstrating compassion and understanding for all those people who have been victims of the Covid-19 pandemic. The fact that those citizens have had weeks to plan for their preferred method of voting is irrelevant. Just ask the Democrats.

Several states now have judges who are changing election laws. Their rulings cover a large and creative list of reasons:

Another wild day in a very busy week! So grab a stool and join Jim and Greg as they break down the latest headlines. First, they get a kick out of Senate Majority Leader Mitch McConnell immediately following up the impeachment trial by filing cloture on five more judicial nominees. They also feel like wretching as mainstream media figures who savaged Mitt Romney during the 2012 campaign suddenly extol him as a man of faith and principle because he voted the way they wanted him to. But they also spend time highlighting figures on the right who were way over the top in their condemnation of Romney. And they try to make sense out of the latest scraps of conflicting information coming from Democrats in Iowa while also looking ahead to New Hampshire. As America pauses for Thanksgiving Day this week, join Jim and Greg as they each list three things for which they are politically thankful.  They both start out discussing encouraging signs in the judicial world.  Then Jim explains which Democratic presidential candidates he’s thankful for and which figure he’s thankful for doing just about everything the wrong way. Greg discusses the political figure he thinks is setting a good example for conservatives to follow while in office and which groups he finds encouraging in a time of great cynicism and polarization.

The director of legal policy at the Manhattan Institute, where he is a senior fellow, James Copland has written and spoken widely on how to improve America’s civil- and criminal-justice systems. “Toward a Less Dangerous Judicial Branch,” his article (coauthored with Rafael A. Mangual) assessing Trump’s court appointments, appears in the Winter 2019 issue of City Journal.

Jim Geraghty of National Review and Greg Corombos of Radio America cheer Neil Gorsuch and other Supreme Court justices for blasting civil asset forfeiture in an Indiana case that may soon limit the government’s ability to seize property from suspected and convicted criminals.  They also sigh as Jeff Flake forces the cancellation of committee votes on two dozen judicial nominees because he can’t get a floor vote on legislation to protect special counsel Bob Mueller.  They also imagine the sanctimony primary between Flake and John Kasich as both seem interested in launching irrelevant 2020 presidential campaigns.  And they react to Stormy Daniels revealing that attorney Michael Avenatti has filed suits and made statements in her name that she never approved and that Avenatti won’t tell her how he’s spending the money many people have donated to her legal cause.

http://enews.earthlink.net/article/top?guid=20181122/e47b488b-ae67-4e79-9691-46a554614078 All due respect to the Chief Justice who defended his colleagues against a Trump accusation in a rare remark (saying no, judges don’t have political agendas even if they always frustrate the President in the 9th Circuit). However, if they hold no political leanings, why can’t we question a suspicious pattern? Preview Open

Jim Geraghty of National Review and Greg Corombos of Radio America relish the Senate confirming 15 more judges and 21 more executive branch nominees in another major tactical win for Senate Majority Leader Mitch McConnell.  They also marvel at the reaction to the Oval Office meeting involving President Trump and Kanye West, as conservatives suddenly think Kanye is profound and Democrats suddenly trash him and declare him mentally ill because he likes President Trump.  And they discuss newly discovered video of Arizona Democratic Senate candidate Kyrsten Sinema declaring her state “the meth lab of democracy.”

David French of National Review and Greg Corombos of Radio America applaud the West Virginia legislature for impeaching four of the state’s five state supreme court justices for gross mismanagement of taxpayer dollars.  They also roll their eyes as the 9th U.S. Circuit Court of Appeals upholds a California law requiring any guns subsequently purchased in the state must include features that don’t actually exist.  And they unload on “conservatives” from Michael Gerson to Steve Schmidt, who contend that conservatives need to vote for Democrats because supposedly the only way to save the Republican Party is to burn it to the ground.

Jim Geraghty of National Review and Greg Corombos of Radio America applaud President Trump for what appears to be a very solid slate of nominees to fill federal appeals and district court judicial vacancies.  Their jaws hit the floor as Obamacare architect Jonathan Gruber blames Trump for skyrocketing health care premiums and for insurers getting out of the individual marketplace.  And they scratch their heads as gun control advocates claim a fatal stabbing at the University of Texas is a strong argument against allowing students to carry guns on campus.

It’s being reported that Senate Minority Leader Chuck Schumer has announced that the Democrats will invoke a filibuster that would force the Republicans to earn 60 votes to end debate and allow a vote on the Gorsuch nomination to the Supreme Court. This is somewhat incredible when you think about it. Today is the fourth […] As a matter of probability, the next president is likely going to get several cracks at Supreme Court appointments. As a matter of certainty, he or she is going to have scores of appointments to make to lower federal courts. All of which raises a question: how exactly do you pick the right person?

In this episode of The Libertarian podcast, Professor Epstein identifies the hallmarks of good and bad judges, considers whether the confirmation process in Washington has become too political, and lays out the structural reforms that he believes could help the federal judiciary. You can take this podcast on the go by subscribing to The Libertarian via iTunes or you can listen in via the embed after the jump.

One thing that pops up in the news time and time again has me puzzled.  I’ll read that in a case before the court, a judge will disallow a certain type of defense.  For example, I’ve read articles that talk about how a judge ruled that the defendant’s lawyers could not use an insanity defense in […]