I don’t watch television (sorry, @roblong) but I still enjoy catching the news. There are some terrible news people out there, and then there are some great journalists, like Sharyl Attkisson. Recently, the fantastic reporter Catherine Herridge has been doing great work and breaking great news. She is Fox News’ Chief Intelligence correspondent and has […]

I recall seeing a political cartoon that contrasted the way the media treated Tim Tebow versus how it treated Jason Collins, the first openly-homosexual NBA player. It depicted Tebow saying: “I’m a Christian,” and the reporter turns his back to him and walks away muttering: “Keep it to yourself.” Next to that picture, Collins is depicted saying: “I’m gay,” and the reporter lifts his microphone towards him and exclaims: “Tell me more, you big hero!!!”

Have you noticed a difference in the way the media covers liberals versus conservatives? When it comes to left-wing economic and social policies, do you find that the media functions more as advocates than reporters? In fact, the media bias is so rampant in this election cycle that Michael Goodwin of the New York Post was forced to write: “American journalism is collapsing before our eyes.”

END_OF_DOCUMENT_TOKEN_TO_BE_REPLACED

The Demise of Gawker This is absolutely fantastic news and could provide the opportunity to pilot my burn-it-down-plow-under-the-ash-and-start-an-organic-kale-cooperative-farm program. More

My view of NeverTrump is that it was the right policy during the primaries but it is the wrong strategy now. It does not make sense for any conservative for the general campaign. I opposed Trump ever since he announced, and I was surprised that other Republicans all seemed not to take him seriously until […]

Vote for awful Trump. Stop Hillary. And, a win by Trump could rescue the entire field of mass media journalism. More Journalists talking about guns is like listening to drunk people sing karaoke. Most reporters believe that when they talk guns, they’re being entertaining, passionate, and presenting a moving performance that will bring their audience to tears. The people in their group at the bar are just as drunk as they are, so they’re laughing and clapping along as they sing. But everyone else in the place just hears a loud, rambling, incoherent, cringe-worthy performance that doesn’t make any sense at all.

END_OF_DOCUMENT_TOKEN_TO_BE_REPLACED END_OF_DOCUMENT_TOKEN_TO_BE_REPLACED

Sometimes, social media like Facebook and Twitter are the best sources of news available. Not even local networks of professional news provide the breadth, depth, or particularity of neighbors spontaneously joining together online to ask and answer questions. My hometown, just north of Houston, is currently flooded to an extent not experienced since I was […]

Sooo… The news media screams that it’s just terrible that people are able to “evade” taxes by stashing money offshore, and why the heck isn’t the government doing something about it? Oh, but no, we’re not gonna give law enforcement any of the actual information they need to do something about it, because journalism? Media didn’t have any problems revealing […]

What’s the difference between today’s front page of The Boston Globe and yesterday’s? Today they admitted they made it up. Tomorrow they’ll resume printing lies that they won’t take credit for. The Globe published a satirical look three months into a Donald Trump presidency. While it’s obviously fake it raises ethical questions. Should any organization […] Here on Ricochet we often discuss the strange phenomenon of the Murray Gell-Mann Amnesia effect, a term that comes from Michael Crichton’s 2005 talk, “Why Speculate?”

END_OF_DOCUMENT_TOKEN_TO_BE_REPLACED

A young photojournalist tried to do his job today and take pictures of a protest movement roiling the University of Missouri. The protest, named #ConcernedStudent1950, complains of institutionalized racism at the Mizzou campus and society at large. Their disruption has gotten so bad, the university president decided to resign earlier today. Since this is obviously news, sympathetic reporters are there to spread the protesters’ progressive message. Unfortunately for the journalists, Mizzou doesn’t seem to teach its students about the First Amendment.

END_OF_DOCUMENT_TOKEN_TO_BE_REPLACED END_OF_DOCUMENT_TOKEN_TO_BE_REPLACED

The charges against them are directly related to their journalistic activities, including not having proper licensing and reporting false news damaging to public security. I believe these charges were motivated by Al-Jazeera’s reporting that was favorable toward the Muslim Brotherhood. Egyptian President El-Sisi has said he favors deporting rather than jailing the foreigners, but will not interfere with the courts.

END_OF_DOCUMENT_TOKEN_TO_BE_REPLACED

These protests in Beirut caught my attention: Protesters and police clashed in Beirut over the weekend in one of the biggest shows of civil disobedience in Lebanon in 10 years, sparked by anger at piles of steaming rubbish on the streets and the political inaction that has led to the situation. More 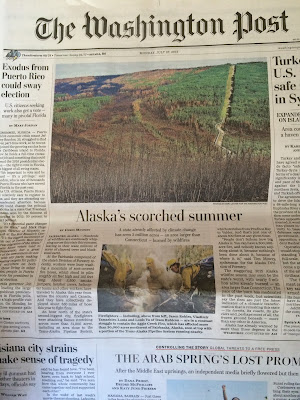 It’s always interesting to watch how the media tailor news to support their favored agenda, and The Washington Post provided an excellent example just last week. Written by Chris Mooney, “Alaska’s scorched summer” carried the subtitle “A state already affected by climate change has seen 5 million acres – an area larger than Connecticut – burned by wildfires.” The article continued on to the last page of the front section, where it took up the entire page.

Mooney is an environment and energy reporter for the Post. He is also author of the best-selling The Republican War on Science, writes frequently on the importance of the proper framing for narratives in support of his views on environmental issues, and is a prime example of what Instapundit refers to as “Democratic operatives with bylines.” He is a man with a mission to convince you to take action.

END_OF_DOCUMENT_TOKEN_TO_BE_REPLACED

Pseud’s recent post about Sharyl Attkisson fact-checking Trump’s passing remarks about McCain raises an interesting dilemma for journalists. How do you report on non-literal statements?

As I said in my comment there, I believe Trump was clearly being sarcastic when he said, ”[McCain] is a war hero because he was captured.” The implication, as evidenced by surrounding remarks, was that McCain is not a war hero because accidental suffering does not make one a hero. (That’s not to say Trump is correct or that he shouldn’t have followed the comment by acknowledging that McCain served with honor, at least. But that’s a discussion for other threads.)

END_OF_DOCUMENT_TOKEN_TO_BE_REPLACED

There was a bizarre event at the President’s press conference Wednesday, one rarely seen in the past six-plus years. A member of the White House press corps asked Obama a difficult question. Major Garrett of CBS News cast a skeptical eye on the administration’s “historic” deal with the genocidal Iranian regime.

END_OF_DOCUMENT_TOKEN_TO_BE_REPLACED Over the weekend, we had an interesting discussion on the Member Feed about journalism as a profession. Southern Pessimist asked me this question: “Give me some ideas,” he wrote, “of what you think needs to be reported that is not being reported.”

My answer to this is so long that I’ll break it into a few parts. What should perhaps precede this post is a detailed historical account of what’s happened to the news industry since the end of the Cold War. I’ll come back to that, though, because the first point I want to make is that these changes have had significant consequences — largely, and surprisingly, bad ones.

END_OF_DOCUMENT_TOKEN_TO_BE_REPLACED

Related to the Snowden dilemma, there is the question of news media profiting off illegally obtained information. Perhaps Snowden’s case is a poor example. So here’s another: Michelle Duggar said her family trusted the police department [which illegally leaked juvenile records]: “Our children poured out their hearts. They shared everything. And then to have their […]

As the China Monster approached, our best and brightest kept their eye fixed on Strawman Hitler
11 Likes· James Gawron