Former federal prosecutor Andrew C. McCarthy is in for Jim today. Andy and Greg try to figure out why police would wait 40 minutes before entering the Texas elementary school when they there was carnage unfolding inside. They also slam Beto O’Rourke for trying to score political points by interrupting the governor’s press conference in Uvalde on Wednesday. And McCarthy brings us up to speed on the Durham investigation into the origins of the Russian collusion narrative, and he explains why Michael Sussmann may be acquitted even though it’s patently obvious that he lied to the FBI.

Good morning all, Where is the Durham investigation?  He was appointed more than two years ago.  Durham was to be the unstoppable incorrutpitble investigator who would get to the truth, drain the swamp and bring dow the establishment.   We on the right hthought “now we got ’em,” or at least some of us. Preview Open 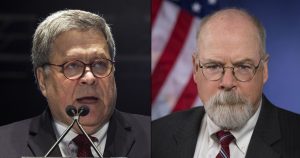 After a surprisingly brief venting about how bad their football teams are, Jim and Greg serve up three good martinis.  They welcome New York Times polling showing Warren as the weakest major Democratic candidate against President Trump and an NYT editorial blasting Warren for falsely claiming that only billionaires would see higher taxes in her plan to pay for single-payer health care.  Then they relish the exit of Beto O’Rourke from the 2020 Democratic field and also hammer the media for building up Beto as some sort of transformational figure in 2018 when he was always an empty suit.  And Jim highlights his extensive profile of U.S. Attorney John Durham, the tight-lipped prosecutor tapped to investigate how the Trump-Russia investigation began in the first place.