I just finished listening to Matt Walsh’s appearance on the Joe Rogan Podcast, episode #1895. I listened via my Spotify subscription so I’m not sure if I can provide a link. Interesting discussion, worth the time. They spoke about two issues: what is a woman and gay marriage.

The “What Is A Woman” discussion was great, as usual, even though the two largely agreed. It was interesting to hear the agreement from Rogan’s perspective, and I’m glad people like Rogan think it important enough to provide the platform to Matt Walsh and to the bigger idea about contra-gender-ideology.

Looking at these numbers makes me wonder. 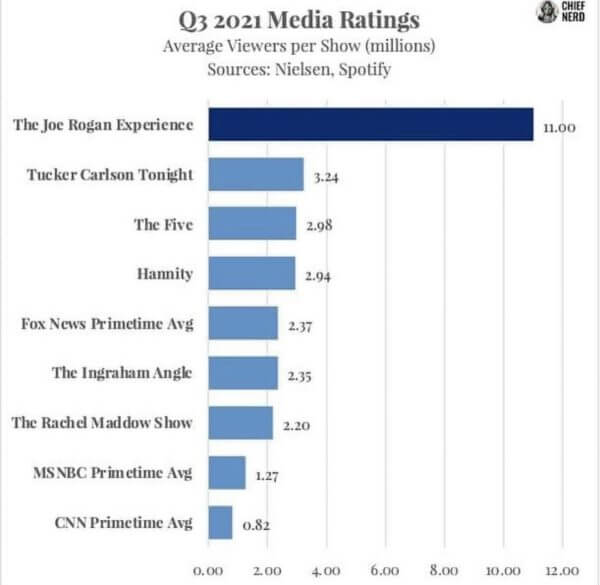 Yannis Pappas (stand-up comic) stops by to mock everyone and everything with Bridget, including: Bill Gates, white people presenting as POC, China, Tom Cruise, the two cults running this country, Scandinavians, and comedians being taken seriously as political pundits. He and Bridget also cover how things have changed since he became a dad, what Kurt Cobain would be like if he were still alive today, their ideas for reality shows, the ability of the Irish to repress their emotions, Joe Rogan’s stamina, why oxy is a man’s drug, and why everyone should drop out of college and start a podcast. Special guest appearance by Tim Dillon. Comedian and actor Jim Gaffigan stops by to discuss the long and painful journey to a career in the entertainment industry, from studying finance at Georgetown, to taking improv classes so he can overcome his fear of speaking in meetings at the advertising agency where he worked, to falling in love with stand-up and watching everyone else in his comedy class find success before he did. Jim talks why failure is such a great teacher, getting lost in other people’s expectations, the creepy thing about doing press, and why he doesn’t want power. In his new movie, American Dreamer, he gets the chance to play against type with a complex character in a disturbing thriller, and he shares how he could relate to the delusions of his character, the American fantasy of the “quick fix,” and the rewards of being able to explore a dark character. He and Bridget marvel at Joe Rogan’s abilities, commiserate over the repressed rage of comedians, and reflect that more dangerous than cancel culture, is the growing trend of leaving people out of the discussion altogether.

I just finished listening to Rogan’s Tuesday (4 Mar) episode about free speech on twitter and regulator bias. The twitter camps big defense was that it wants to minimize physical danger individuals can encounter by the mob or by themselves (convo relating to trans users and dead naming). Pool argued that harassments are going to […]