In October 1962, I was 10 years old, beginning sixth grade at P.S. 79. Like my classmates, I was surprised to hear that we might not have school the following week, because by then, there might not be a school. Or much else left standing. There have been plenty of books and documentaries and a handful of fictional TV shows and films devoted to this crucial moment in history. This post is a review of what I think were the best of the pack.

One of history’s coincidences was the publication earlier in 1962 of Barbara Tuchman’s “The Guns of August,” about great powers stumbling into a disastrous world war no one really wanted. John F. Kennedy liked the Tuchman book and recommended it to his national security chiefs. They read it a few months before the Cuban missile crisis, or as the Russians have always called it, the Caribbean crisis. That book’s title inspired the best (IMHO) of the screen treatments, 1974’s three-hour ABC television film, “The Missiles of October.” It’s almost forgotten today and hard to find online. Why do I think it was the best? We’ll get to that.

Last month I saw a blog post on a work network about a connection between JFK and Star Wars I didn’t know about. A new to me theory about JFK’s assassination was brought up in the comments. I thought about posting it here but didn’t want to run afoul of the Code of Conduct. A […]

A troubled and afflicted mankind looks to us, pleading for us to keep our rendezvous with destiny; that we will uphold the principles of self-reliance, self-discipline, morality, and, above all, responsible liberty for every individual that we will become that shining city on a hill. – Ronald Reagan, November 13, 1979. On this date in […] @Jasonrudert posits in @ctlaw’s post that what we’ll really find in the Kennedy Assassination files is the secret to why Lincoln was shot: Lincoln’s mythical and famous 200 mpg carburetor, something GM, Ford, and Chrysler have been rumored to have buried decades before.  Look, I unearthed those plans years ago (they were buried under a […]

The following is a repost of a piece I wrote 3 years ago here.  With all of the Russian Collusion kerfuffle I thought it apropos to revist it.  You see, “collusion with the Russians” is hardly a new problem, and JFK himself actively and secretly colluded with Khrushchev, using his brother Bobby as a clandestine intermediary.  JFK told no one in his cabinet, or in the Secret Service, that he was doing this.  Why?  Well, for starters Kennedy was not particularly keen on the continuing defense of West Berlin, and had practically no concept of its extraordinary value to NATO as a bastion right in the middle of the Warsaw Pact.  In his mind, when he assumed the presidency, it was as best a distraction from his desired rapprochement with Moscow.  Kennedy wanted to “reset” Soviet relations after 8 years of Eisenhower refusing to “play ball”.

Secondly, Khrushchev did actually interfere with the 1960 presidential election in his own way by managing international events such that he made Nixon look paranoid against Kennedy’s openness.  Khrushchev therefore often claimed that he himself got Kennedy elected (Chicago notwithstanding, of course), and he thus felt Kennedy owed him.  The Berlin Crisis of 1961, the precursor to the Cuban Missile Crisis, was in no small part of this mutual dalliance between Khrushchev and Kennedy.  The passing of US intelligence secrets to the USSR via Bobby, the feeding of Soviet propaganda and misinformation back to Kennedy, and the dangerous near-loss of Berlin were all JFK’s doing.  We should bear all this in mind today when we are so quick to decry what Trump may or may not have done, just as we should remember that JFK learned from his early mistakes.  It hardly need be mentioned that many historians today, in their near-saintly portrayal of Kennedy, or in their endless vituperation against Trump, have ignored this episode when the US nearly bungled one of its most valuable protectorates in the Cold War.

One of the most famous speeches given by President John Fitzgerald Kennedy was at Rice University on September 12, 1962, where he said “We choose to go to the Moon in this decade and do the other things, not because they are easy, but because they are hard.” How was such a deadline determined given the enormous complexity of such an endeavor?

The parallels between Kennedy’s first year as president and Obama’s entire first term are eerie: presidencies preceded by divisive campaigns against the “old way of doing things,” rejections of lessons already learned about the use of power, and the dangers of a rudderless America trying to retreat from the world stage. There is no doubt […] 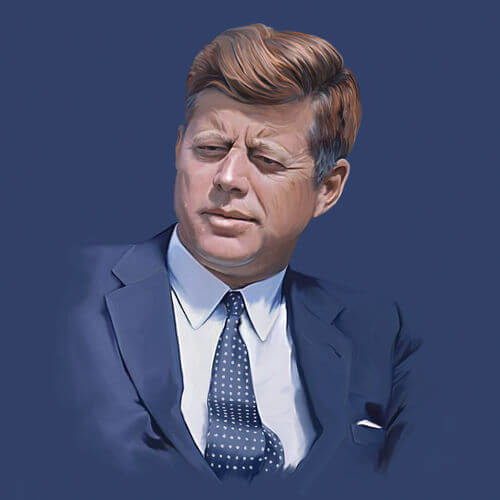 I know, Friday is the 50th anniversary of President Kennedy’s assassination. It was a pivotal moment in many people’s lives. It changed the course of the 1960s and cruelly cut short the young life of a charismatic politician.