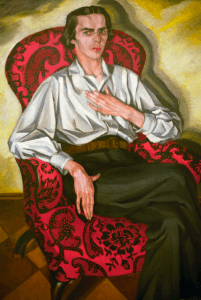 When it comes to pre-WWII Russian literary critics and poets, Vladislav Khodasevich is not well known, particularly in the West. Compared to someone like, say, Bunin or Tsvetaeva, he’s been largely ignored. But Khodasevich deserves attention, both as a skilled memoirist and poet, and as one of the few who chronicled the whole journey of his generation through the realities of WWI and the White exile, grappling with issues of right, honor, and Russian identity, especially for those who carried non-Russian blood in the vast multiethnic empire.

Born in Moscow in May of 1886, Khodasevich was the son of a Polish nobleman and a Jewish woman. Unlike the union of Vera and Vladimir Nabokov, though, theirs was not an unusual act of mutual tolerance. Jacob Brafman, Khodasevich’s maternal grandfather, was a famous convert from Judaism to Orthodoxy, who wrote The Book of Kahal, a forerunner to The Protocols of the Elders of Zion. He entered the law faculty of Moscow University in 1904, then switched to history and philology the next year, staying on until 1910. It was during his time at the university that Vladislav met Samuil Kissin, a law student and aspiring poet from Orsha who was a year older than he. Twenty years later, he said Kissin, whom he affectionately nicknamed Muni, was “как бы вторым «я»” (like my second self) and reflected on how “we lived in such a faithful brotherhood, in such close love, which now seems wonderful to me.”

Despite his training, Khodasevich did not want to be a historian or a philologist, but, like Kissin, a poet, and dropped out in the final year of his course. He frequented Moscow’s literary salons and cafes, and published articles and poems for famous literary magazines, like Golden Fleece and Libra. Although he was the descendant of a noble family, his father had come to Russia impoverished, and Kissin, who hailed from an observant Jewish merchant family (he was trained in Hebrew and the Talmud at home during his childhood) actually had a much more secure financial position, though he was always willing and happy to support his friend along with himself.

(Important Update Oct. 15) On Thursday of this week, UNESCO voted 24-6 to deny that the Temple Mount is a Jewish site and therefore, has no connection to the Jewish people. Further, it will only use the Arab name for it. Below is the article and how countries voted, or for some reason, abstained.  http://www.jpost.com/Breaking-News/UNESCO-No-connection-between-Temple-Mount-and-Judaism-470050 Preview […]

Do Republicans Ever Fight Back?
The Ricochet Audio Network