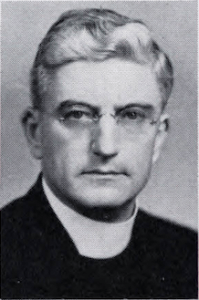 This is about a World War II Navy Chaplain, Charles Robinson, who helped free the first Allied POWs in Japan. I’m posting this on Ricochet partly because I was irritated by the recently discovered comments by the Democrat candidate Raphael Warnock in the Georgia special election for Senate, who orated from the pulpit that people cannot serve the military and God. I didn’t find this to be true during my Navy career, whether one was serving as a Chaplain or just an adherent of a religion. Some of the people I respected the most were men of the cloth and I still value their friendship and the time we served together.

The essay is unrelated to the politics of the moment, so if you’d like a break from news about the election, the essay is safe to read. I doubt any of you have heard about Father Robinson, but his story is one that is worthy of sharing and, I believe, undercuts the narrative that Reverend Warnock peddles. Father Robinson pursued studies in theology that led him to become a Jesuit Priest almost 100 years ago, and he went overseas to Japan for his first posting. What he learned while in Japan ended up helping hundreds of prisoners of war in the Tokyo area who had been tortured or were starving at the end of the war.

The full essay is based on a research project for a history class I completed earlier this year. The professor described how Father Robinson had accomplished a mission of mercy for the Jesuits at the Jesuit Sophia University in Tokyo, and due to my Navy background, she suggested I research it for the term paper. My research determined that he had done a lot more of consequence before his rescue mission to Sophia. At the war’s end, he was stationed onboard the Battleship USS Missouri (BB-63), which arrived at the entrance to Tokyo Bay a few days before it would host the surrender ceremony on 2 September 1945. Of the tens of thousands of sailors who came to Tokyo Bay and were present for the surrender ceremony, Father Robinson had a skill that ended up being critical for rescuing hundreds of prisoners of war (POW) languishing in Japan’s numerous POW camps. He used his knowledge and abilities with distinction, in ways that helped smooth the process of quickly freeing the first group of POWs and saving other lives.

See the two standards, their standard bearers, and the followers of each standard. First, look to the prominent place where the devil (the adversary) is, and see his followers. His followers possess good health, the pleasure of society, the praise of others, wealth, even fun!  Then look to the lowly place where Jesus is and […]