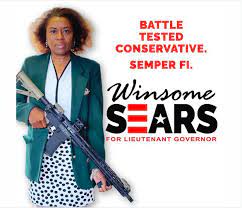 As the race for the Virginia governor’s mansion is sucking up all the oxygen, it is worth keeping an eye on the down-ticket races that will also be decided. The headline race may be a bellwether of things to come. And in fact, even a close loss may still turn a lot of heads. There is an excellent synopsis of the polling and status by Kelly D Johnston here.

But as a Virginia resident, the race for Lieutenant Governor and Attorney General have just as much interest. In both cases, the GOP has nominated exceptional candidates. Former Marine and (believe it or not) electrician, Winsome Sears is a breath of fresh air. Perhaps no more than in this awesome press release photo.

Living in the tension; reflections on pregnancy and motherhood
Vicryl Contessa · 49 Likes

BlackRock Gets Hatcheted Down In Size – Because States Here At Home Are Fed Up With This Economic Goliath
CarolJoy, Not So Easy To Kill · 11 Likes

If I Wanted to Destroy America I Would Do Exactly What the Biden “Administration” Is Doing.
The Ricochet Audio Network