So I was listening to Start Making Sense, a podcast put out by The Nation (yeah, I know) because I wanted to get a progressive take on the January 6 hearings.  As expected, their take is that Trump intentionally provoked a violent insurrection by pushing the Big Lie that the election was stolen when he knew it was not.  Then, The Nation’s National Affairs Correspondent, John Nichols, offered this comparison to the disputes of the 2000 election:

Election night 2000, back when Bush was running against Gore. Karl Rove made a series of instantaneous decisions that made George Bush president. They hired up all the lawyers in Florida. They got on message in a whole bunch of ways.  They decided they were going to send James Baker in. These were instantaneous decisions which all ended up benefiting Bush tremendously, even though he actually lost Florida and lost the election.

Former federal prosecutor and National Review Online Contributing Editor Andrew C. McCarthy is in for Jim. Join Andy and Greg as they break down a Supreme Court ruling on whether double jeopardy protections exist between different systems or “sovereigns” – in this case whether a conviction is allowed in federal court after a verdict was rendered on similar offenses in the Court of Indian Offenses in Arizona. They also parse two rulings on immigration cases that came down on Monday. Finally, Andy also lays into the January 6th committee for being little more than a political performance by not allowing Republicans to choose their own committee members and not permitting cross-examination of witnesses.

My job is in the DoD supporting scientists and engineers. I do not produce intelligence products but have access to them. The classified network has duplicated a number of tools from the internet, such as wikipedia, a search engine, and Twitter. The Twitter clone is called eChirp. When it works as intended, it’s a great […]

So, apparently the House has hired a TV executive to produce a video on January 6, which transparently is for the purpose of aiding the Democrats election prospects this fall.  Why is this not a violation of election finance laws?  It is one thing for actual congressmen to make political points, but it seems different […]

The January 6th Committee has hired a professional media propagandist to add some Zing! Zang! Pazowie! to their televised proceedings on the very serious and not at all political work they are doing to “get to the truth” of the incidents on January 6th of 2021 at the US Capitol.

Congress’ committee to investigate the Jan. 6, 2021 insurrection on the U.S. Capitol and then-President Donald Trump‘s role in it (known as the Jan. 6 committee) has tapped former ABC News president James Goldston to produce a primetime special dedicated to the hearing. According to Axios‘ Mike Allen, Goldston has been “busily producing Thursday’s 8 p.m. ET hearing as if it were a blockbuster investigative special.”

Star Trek: Brave New Worlds was supposed to be the show that fixed all the many, many problems of Star Trek: Discovery (STD). Specifically, STD represented a fully woke version of Trek, entirely focused on a Messianic minority female lead, with the established history of the Trek universe retconned, coupled with dark, dreary, and nonsensical storylines about time-traveling “red angels” and all the dilithium in the universe exploding because an alien was sad or something.  (Red Letter Media nailed STD.) STD capped this off by casting Stacey Abrams as the president of United Earth. (Eyeroll)

Producers supposedly developed the series in response to fans’ demand for more episodic shows that were more in line with the original Star Trek vision of an optimistic future. The premier episode of STSNW featured Captain Christopher Pike explaining to an alien race how World War 3 began on Earth. It apparently was MAGA that started it.

It’s hard to call this justice, considering the severe persecution the Biden regime has been putting these people through, but at least one January 6th defendant has been exonerated. Ironically, he is using the very defense that has been denied as a ‘conspiracy theory.’ (Emphasis mine)

A federal judge on Wednesday found that a New Mexico man “reasonably believed” that police officers let him into the US Capitol during the Jan. 6 breach, finding defendant Matthew Martin not guilty of all charges.

During the Christmas 2020 season we enjoyed the company of son #1 (USMC) for an extended vacation prior to his deployment to “Europe” (more on that later). As background, he was commissioned in 2011 and had a previous deployment to Afghanistan. While no lover of DJT, he called me on election night 2020 genuinely happy […] 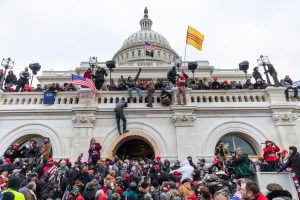 WASHINGTON, D.C.—Special agents involved in last year’s ‘January 6th Insurrection Against Democracy™’ are set to reunite as guests of honor at an extravagant gala hosted by the FBI. The event will reportedly feature live music and entertainment, with comedian James Corden acting as master of ceremonies. (Babylon Bee) Preview Open