I recently read a fascinating book, The Art of Conjuring Alternate Realities, by Shivam Shankar Singh and Anand Venkatnaryanan. From the Introduction: Preview Open

Has it occurred to you that is irrelevant whether Officer Derek Chauvin is found guilty or innocent at the end of his trial? At least to those who wish to wreak havoc across this country. There was a time when we felt that unless the “perpetrator” were found guilty, all hell would break loose. Buildings […] 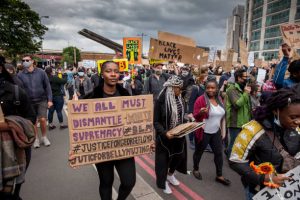 As the Three Queens of the Orient have been speaking out against the status quo, they are making themselves known. You know them: Ilhan Omar from Somalia, Rashida Talib whose family came from Palestine, and Alexandra Ocasio-Cortez. Oh, you say AOC isn’t an Orient Queen. Well, let’s not quibble; I’m sure her friends would be […] I’m not surprised that we’ve awakened to a gray, rainy day. Everything feels heavy and burdensome. It mirrors the dark mood that rests beneath the ordinariness of life. As I’ve tried to tune in to the beauty of another day, it is cloaked in sorrow and dread. Today we leave for Daytona Beach. Unfortunately it’s […]

It was pathetic. The Dems were so determined to demonstrate their hatred of Trump that they just had to act like fools to make their point. I so appreciated the camera regularly showing them sitting on their hands, reluctantly clapping or standing because they didn’t know how to behave: should I clap for that point […]

In They Hate Your Guts (just-arrived issue of The Weekly Standard) P.J. O’Rourke nails the difference between us’n and them. Maybe there’s more to say, but not much, and there is something wrong with you if you don’t laugh at his descriptions of our current candidates, especially, but not limited to, Jindal.  Trigger Warning: It may hurt […]