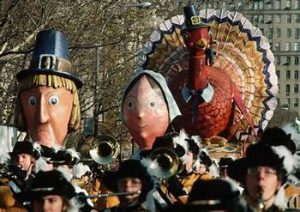 Put together, these two words sum up our United States holiday of Thanksgiving. It sets us apart from some countries, ideologies, and regimes.  It has a history that some may try to distort.

Our forefathers tell a different version. As a child, we dressed up as Indians and Pilgrims in grade school. We had to learn how America came to be, as we ate candy corn and made cutouts of turkeys using our hands.  Thanksgiving meant something and still does.

This week on “The Learning Curve,” Cara and Gerard talk with Nathaniel Philbrick, historian, winner of the National Book Award, finalist for the Pulitzer Prize, and author of Mayflower: Voyage, Community, and War. Mr. Philbrick shares what we should know about the actual historical events of the First Thanksgiving in 1621. He describes who the Pilgrims were, their beliefs and educational traditions, and the obstacles they overcame to found Plymouth Colony. They review the seminal documents of this history, such as the Mayflower Compact, and lessons about the Pilgrims, Patuxets, Wampanoags, and their world. They discuss how the Native Peoples of 17th-century Massachusetts lived, worshiped, and governed themselves, and noted figures like Massasoit and Squanto. They also explore the experiences of Pilgrim and Native women, and their role in the First Thanksgiving. Lastly, Mr. Philbrick explains how the relationship between the Pilgrims and Native Peoples changed in the decades leading up to King Philip’s War. The interview concludes with a reading from his book, Mayflower.

Stories of the Week: Higher education is expecting to see a sharp enrollment decline over the next 20 years, in what industry experts are calling “the enrollment cliff,” as a result of declining birth rates during the Great Recession. Is the highly respected New York State Board of Regents high-school graduation exam on its way out?

During the fall of 2020, I joined a family friend on a bike ride along the Susquehanna River that borders Lancaster and York Counties in south-central Pennsylvania. Both counties are deep red politically and steeped in history. We started at Columbia, Pennsylvania, near what’s left of the Wrightsville Bridge, the burning of which in 1863 […]

Today is the great American holiday of Thanksgiving. It’s not a religious holiday, and yet it is religious. It is a day to thank God for all the blessings he has given us. Since all religions, I think, thank God in some way and since we have many religions in the United States living side by side, this is a perfect American holiday. One that we can all share.

No scores or deductions this year because that is a sign of white supremacy and systemic racism: counting and stuff, you know. But for those who insist on a sporting time, give one point for each. 1) All AR15’s and M4’s should be on a combat sling so as it hangs straight down from shoulder […] Well, Thanksgiving Day has come and gone, and as with so much of my life this past year, it didn’t go off exactly as hoped, expected or planned.

I’d already announced, last week, that since Mr. She and I were on our own this year, I’d abandoned the idea of going full-bird, as it were, and would probably be doing my favorite iteration of fresh salmon on a bed of asparagus, with rice and pine nuts, and salsa verde over all. I’d dutifully acquired all the ingredients, driving for what seemed like days into Pittsburgh and back, and it was just after dinner on Wednesday evening. I was happy, ready, settled, watching an old movie on TCM, and nicely relaxed (well, except for the cat), with an adult beverage on the side, knitting a Christmas present for my granddaughter when, Blammo! Out went the lights. I suppose that wasn’t a total surprise, as it had been blowing, what I was taught to judge on the Beaufort Scale, about a Force-8 gale for several hours outside. I daresay a tree took down a line somewhere, and there it went.

Truth be told, it could have been worse.  And it has been.  But over the summer I finally got the backup generator hooked up, and our 8kW Generac kicked itself on flawlessly, about ten seconds after the power dropped.  It doesn’t support the whole house, just the essentials–the water pump, the fridge and freezer, the blower for the heat, and a few strategically placed circuits.  So for the first time in 35 years down here, we had water during a power outage.  The height of sybaritic luxury. (I don’t want to know if that’s a rhetorical faux-pas or not.  It deserves repeating. So I did.)  The generator doesn’t run the kitchen stove, though; so it looked as if FirstEnergy was about to put a crimp in our holiday celebration.  Especially when I woke up on Thursday with no clear indication of when the power would be restored.

There were too many posts yesterday on which to add Happy Turkey-Day comments, so I figured I’d wait a day. No “Black Friday” best wishes, though. I plan on staying away from any store today. Nope. I’m going to play some Fallout 4 on the ‘puter, then watch a little football. I’ll even empty the […]

I’m looking forward to Thanksgiving dinner at my daughter and my son-in-law’s home today. I have a lot to be thankful for. A wonderful marriage of 44 years. Everyday of our marriage has been a holiday, every meal a feast, regardless of what my wife might tell you.  Two grandsons that are a source of […]