Real life, Twitter, TV, articles… this keeps coming up. I want to be clear. The game they are playing at odd hours on the corpses of immigrant workers far off in the desert is called soccer. No “in America” or “by Americans, Canadians, Australians, New Zealanders, the Irish, Pakistanis, South Africans, Nigerians… et al.” clarification needed. The game is Association Football, shortened by weird Oxford students who add -er to the end of everything to Soccer Football and later just Soccer. The game falls under the same identifying umbrella as Rugby Football, Gaelic Football, American Football, Australian Rule Football, and Hockey (field for certain – I’m not sure about ice.)

No sane person has a problem with anyone calling the game football in a context that makes it clear which of the many games you are referring to that are encompassed by the word. The British can say football all they want, knowing that those around them understand what is being referenced is the type of football known as Association Football, just as I casually use the word football to refer to the American Football type in which Alabama just beat Alabama Polytechnical Institute 49 to 27. I do have a problem when some East End denizen thousands of miles away gets a bee in his trunk or a local hipster with a crisp on his shoulder and a copy of Proust sitting on his night table that he’s started six times gets high and mighty because I or someone else is more specific than he wants to be.

Happy Labor Day! As we observe the unofficial end of summer, Jim and I present a brand new episode of us answering your questions. Today, we discuss which candidates are likely to overperform or underperform their states’ natural partisan bent in the year’s midterm elections…and we have names from both parties in both categories. We also fess up and admit some things we were wrong about in our political analysis over the years. And we’re asked what we think of college football and all of the big changes happening to the sport as we kick off a new season. Enjoy the discussion, and join us again for our usual format on Tuesday.

No scores or deductions this year because that is a sign of white supremacy and systemic racism: counting and stuff, you know. But for those who insist on a sporting time, give one point for each. 1) All AR15’s and M4’s should be on a combat sling so as it hangs straight down from shoulder […]

For two years, I told Bears fans to shut their emotion faucet off for a second and wait for Mitch Trubisky to be replaced properly. Said it at sports bars, said it on social media, said it on the street. He wasn’t ever going to be a hall of famer, but they won with him […]

I remember the day vividly. August 18th, 1992. My Dad finishes the sports page(well, really, the classifieds that were attached to it) and tells me to look at the front page. Preview Open

It was a simple nine-yard play.

On the 49ers second possession, Raheem Mostert carried the ball for nine yards, then noticed something didn’t feel right. He went right off the field. Diagnosis: chipped cartilage in his knee. He opted for cartilage repair surgery, which ended his season at four snaps.

A little story… I moved to Tennessee when I was twelve days shy of 21 years old, and enrolled at Lee University at 22. I moved there mere months after UT won the national title, so the whole state was painted in orange…well, even more than normal at least.

I didn’t grow up a college football fan. If a game was on Saturdays, Dad and I would watch, but it wasn’t appointment TV. Appointment TV was the Chicago Bears…and the Boston Celtics when Bird was around, but that’s another story for another day. I said to myself that I wouldn’t get myself into this SEC religion. I’m not getting into this SEC religion. I was adamant about this.

As I write this, I am watching “Petty Blue”, a documentary narrated by Kevin Costner. I’m currently on the part where he was in his last race, and after a wreck, the team, and Richard himself, willed that car to race the final lap for the farewell to the fans. It was the perfect goodbye. […]

Did you know Dr. J was an Atlanta Hawk for two preseason games? It’s true. Long story short, the Milwaukee Bucks picked him in the 1972 draft after one year in the ABA, which would have put him with Oscar Robertson and Kareem Abdul-Jabbar(So much for there not being super-teams back then). He ended up […]

Disappointing results on the pitch Sunday night as England fell to Italy on penalty kicks. Among the faithful in attendance was one Toby Young who was hangin’ with the WAGS. We get a firsthand report from Wembley.

The college football playoffs have come up in conversation once again. A twelve team playoff has been floated in the media, and I would be all for it. However, I would propose something even more drastic. In April, the several European soccer teams announced, to much chagrin, the formation of a “super league”. This league […]

1) 2019 rule still carries: MAGA hats worn sideways or backwards. Headbands are OK. Penalty: No apple pie. 2) Tomahawk Chop Rule Update: Any performance of Tomahawk Chop for more than 3 Mississippi’s, regardless if in reference to Indians and/or Washington R**s***s football team. Penalty: Deduct any corn dish from your plate, except Corn-Lima bean […] 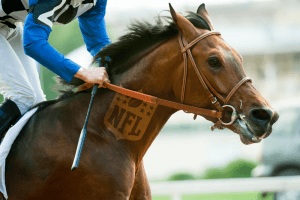