Join Jim and Greg as they welcome a new congressional map in New York that should give Republicans better chances to win more seats than the heavily gerrymandered version from Democrats that multiple courts have struck down. They’re also pleasantly surprised to see Russian President Vladimir Putin say Sweden and Finland joining NATO will not be seen as a direct threat to Russia. And Jim takes a deep dive into the skyrocketing cost of diesel fuel, what’s behind it, and what the consequences will be. 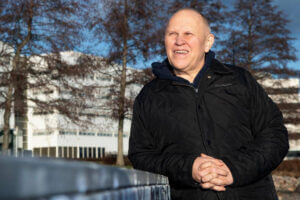 Russia has always befuddled Western analysts, a fact best summed up by Winston Churchill who said the multicontinental colossus is “a riddle, wrapped in a mystery, inside an enigma.” More recently, “experts” wondered why Putin was pushing forces to Ukraine’s border, then why he launched such a massive attack, and now why on earth he’s reducing cities to rubble and pushing civilians into mass graves.

In yet another Young Americans first, Jack speaks to a non-American guest calling from another country: Oscar Holmstrom, his Boston Marathon finish-line friend and a young medical professional from Finland. They discuss the wonders of Oscar’s homeland, and how it has been dealing with coronavirus.

Just for the joy of it, I give you singing police. Further, if the official Finnish police YouTube channel, Poliisitube, says Santa Claus is real, it must be so! Police singing in the snow: Finland is a happy and homogeneous little country of 5.5 million people. A consistently strong Winter Olympics performer. Heavily forested. Oh, and one more thing: it’s a “capitalist paradise,” at least according to a Sunday New York Times op-ed by Finnish-American journalist Anu Partanen. Dynamism and innovation coexist nicely with high supertaxes and a superbig welfare state. Partanen’s message to America: Be not afraid of universal healthcare, tuition-free college, and months of paid parental leave. Also the taxes. Your economy will be just fine with a much cozier version of capitalism.

And maybe she’s right. But why is it reasonable to automatically assume what works well in a tiny country full of Finns would work equally well in a big country not full of Finns? Different people, different geography, different history, different culture. As my AEI colleague Stan Veuger said in a 2016 podcast Q&A about the Nordic nations: “They’re relatively homogeneous, they have stable politics, they do not have a tradition of ethnic groups or racial groups that have long been disadvantaged. So that makes a lot of these programs more feasible and more affordable too.” And their egalitarian natures seem to predate their welfare states.

Then there’s the matter that Americans are richer than Finns. I mean, it seems worth mentioning that we are about a quarter richer based on nominal per capita GDP and about a third richer based on purchasing power. Nor does Finland have a single billionaire entrepreneur, in the tech sector or otherwise. As economists Daron Acemoglu, James A. Robinson, and Thierry Verdier explain in the 2012 paper “Can’t We All Be More Like Scandinavians?”:

I had never heard of this holiday until I met my wife. Back in the 1950’s, Minnesota Finns got tired of the Irish making such a big deal out of Saint Patrick, so they invented their own saint and accompanying legend. Just as Saint Patrick drove the snakes out of Ireland, Saint Urho drove the […]

We keep hearing about how Finland is outperforming us because of their student-centered instructional model, national school lunches, and delay in teaching of reading until the child is older. (Actually, their performance nationally has been dropping over the years since they switched from traditional instruction.) Anyway, this article explains that the US has a completely […]

President Donald Trump held a joint press conference with the president of Finland, Saudi Niinistö. Topics included NATO, the Arctic, Russia, NATO, Hurricane Harvey, FEMA, and NAFTA, among others. President Niinisto twice deflected leading questions from reporters asking him to give Trump advice on Russia. When Fox News’s John Roberts asked Trump about the president’s pardoning of Joe Arpaio, Trump’s lengthy response included pulling a piece of paper from his breast pocket on which he had written a list of pardons that presidents Clinton and Obama had given to criminals and terrorists. The list included Marc Rich who, Trump pointed out, Clinton pardoned after Rich’s wife donated hundreds of thousands of dollars to the Clintons. Trump also told a reporter from One American News that “one way or the other, Mexico’s going to pay for the wall, that’s right. It may be through reimbursement, but one way or another Mexico will pay for the wall.”

I’m a night owl and the rest of my family are not. So when Christmas Eve rolls around, the house is quiet and I’m wrapping a few last gifts, assembling bicycles, and arranging everything just so under the tree, I listen to quiet, reverent carols to fit the mood. Being of Finnish extraction, this is my favorite. Proving that a story can be simultaneously utterly bizarre and make perfect sense, the New York Times reports that Middle Eastern and African refugees are crossing into Europe through … wait, Finland!?

A relative on Facebook posted this, and maybe some readers would find it convincing. It engages several American arguments against systems in countries such as Denmark and Sweden that require high taxes for lavish government benefits to its citizens. The article makes Hillary sound almost conservative. Does the author effectively dismantle the claims that collectivism works […]