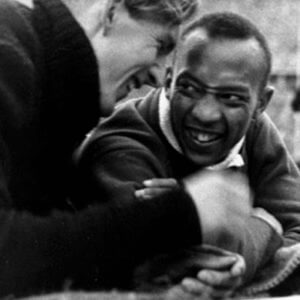 You will be changed, seeing this story. The great Jesse Owens was a champion in the Olympics and championed friendship with a competitor for a lifetime. And do not miss the afterword with little-seen pictures. (Two-minute read and video.)

The 1936 Olympics was held in Germany. Adolf Hitler was in power. To Hitler, the Olympics were to be a statement about the supremacy of the so-called Aryan race. Every other ethnicity was inferior. But Jesse Owens, of African ancestry, won four gold medals at the 1936 games. Owens beat some of Hitler’s greatest athletes.

Much could be said about Jesse Owens’s great skill as an athlete. But there is a deeper story, a human story, the friendship between Jesse Owens and Luz Long, a German long jumper. Long and Owens cemented a lifelong friendship in a matter of days. Wonderful pictures exist of Owens and Luz talking or walking together arm in arm. As Owens said of Long,

“Freedom from Fear” was one of Franklin Roosevelt’s “Four Freedoms.” This, and the other three: Freedom of Speech, Freedom of Worship and Freedom from Want, was FDR’s way to redefine American rights from the negative, i.e., the restraints that are put on the government, to the positive, meaning things that the government was required to provide to you.

If anything, the last eighteen months have proven is that the government sees no upside in a population free from fear. Along with their allies in the media, our government (and governments all around the world) have been stoking fear and creating a populace more desperate for safety than liberty.

The only thing I am afraid of is fear.—Arthur Wellesley, 1st Duke of Wellington, 3 November 1831

Fifty years before FDR was even a gleam in his daddy’s eye, a much greater light wrote down a thought that shows a true understanding of fear.

I was behind a Sanders supporter for a while during my commute today. Two Sanders bumper stickers, two ‘I love science’ type stickers, and an ‘Old School Progressive’ with FDR’s face sticker. I’ve wondered if Leftists revere FDR as much as conservatives revere Reagan or does the appearance that history seems to begin the day […] Welcome to the Harvard Lunch Club Political Podcast for January 2, 2017, this is, my god I can’t believe it, our century mark podcast. Yep, podcast number 100! And as grandiose as that is, we have an equally grandiose theme, it’s the Back to Camelot edition of the podcast, brought to you by ZipRecruiter. If your business is giving you headaches because you can’t find the right candidates for the wonderful jobs you have to offer, take a look at ziprecruiter.com.

You can find us online at HarvardLunchClub.com and on twitter where our handle is @HLCpodcast; we are also on facebook, look for Harvard Lunch Club Political Podcast. And of course we are here every week on Ricochet – the groovy center right clubhouse for intelligent talk and interesting perspectives.

Jim Geraghty of National Review and Greg Corombos of Radio America groan as Rush Limbaugh says Donald Trump’s trillion dollar infrastructure bill could be a big success – just like FDR.  They also get a kick out of Democrats getting really excited over the prospect of a 78-year-old Joe Biden running for president in 2020.  And Jim unloads on a “faithless elector” from Texas, who says he cannot cast a vote for Trump.

The author David Pietrusza will be talking about his book 1932: The Rise of Hitler and FDR: Two Tales of Politics, Betrayal, and Unlikely Destiny at the Wallace Center at the FDR Library and Museum in Hyde Park, NY, on Wednesday, October 7, at 7pm. That’s only about a half hour from me. Not sure I’ll […]

Never mind calling the ayatollah, greenlighting Keystone XL, or repealing Obamacare, he should: Reinstate executive orders prohibiting abortions in federal facilities, pending legislation. Rename Mt. Denali back to Mt. McKinley, pending legislation renaming it to Denali and renaming the surrounding park McKinley. In Roosevelt park in Washington, D.C., give the statue of FDR back its cigarette holder. What […]