Hubwonk host Joe Selvaggi talks with constitutional scholar and George Mason Law Professor Ilya Somin about the flaws and legal vulnerabilities of the first and second CDC eviction moratoriums and discuss what current and future court rulings will mean for the limits of executive agency powers.

Join Jim and Greg as they welcome New York Democrats planning to expedite the impeachment probe of Gov. Andrew Cuomo and a new poll showing most New Yorkers want him out of office. They also hammer President Biden for bringing back the eviction moratorium while admitting the Supreme Court will probably rule against him. And they’re exasperated as NIH Director Dr. Francis Collins goes on national television and tells parents to mask up at home to protect their kids from COVID.

Hubwonk host Joe Selvaggi talks with MassLandlords’ Doug Quattrochi about ways landlords faced the challenges of being caught between tenants unable to pay rent during COVID-19 shutdown and having little or no programmatic relief from state and federal agencies. 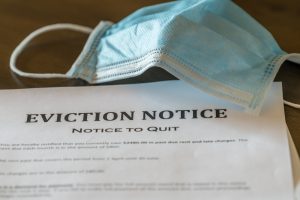 Last month, I testified before the New York State Advisory Committee to the United States Commission on Civil Rights on the vexed question of “Discrimination in Eviction Policies and Enforcement.” Several months before my testimony, the commission issued a report concluding that the United States “is in the middle of an eviction crisis, one in which persons of color are disproportionately impacted and suffer unequal treatment.” The study further held that the racial disparities in eviction that existed pre-COVID have been magnified since the pandemic struck—such that the eviction crisis has an important civil rights dimension.

The economic impact of the pandemic has been exceptionally devastating in New York, in part because of the severe limitations that Governor Andrew Cuomo placed on economic activities under his broad emergency powers. These restrictions directly hamper the ability of tenants to earn money and pay rent, thereby affecting the earnings of landlords, many of whom are part-time. The question then arises as to what kinds of remedial activities should be taken in both the short and long term.

To the New York State Advisory Committee, as well as many other commentators, the solution is a moratorium on tenant evictions. The committee believes the current moratorium should be kept in place, perhaps for as long as it takes for the economy to return to normal. This assessment is supported by the common assertion that the disparate impact of evictions on black and other minority populations is evidence of an entrenched form of “structural racism” that requires corrective measures. The disparate impact of the pandemic cannot be denied. But in my view, any claim of structural racism (or worse) cannot be sustained.

No One, but No One, Is Safe from Getting Covid, Regardless of Vaccination Status
RushBabe49 · 21 Likes