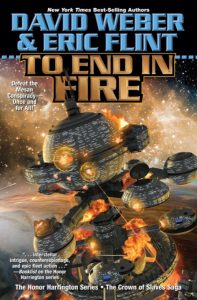 “To End in Fire,” by David Weber and Eric Flint is the Honorverse’s latest arrival. Part of the “Crown of Slaves” strand of the saga, its focus is on the genetic slavery in the far future. The slave-sponsoring planet Mesa, and the self-emancipated slaves of planet Torch, feature prominently.

Earlier in the series Honor Harrington’s Manticorian conquered Empire Mesa. Manticorian with their starfaring allies in the Grand Alliance also defeated the Earth-based Solarian Empire. The Grand Alliance was formed after the Solarians – headquartered on Earth and making up the Core Worlds of human-occupied space – attacked Manticore.  That war and earlier wars between Manticore and Haven were triggered by the Mesa-based Alignment. Mesa was taken to subdue the Alignment. 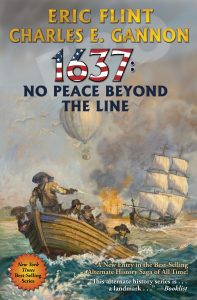 Eric Flint launched his Ring of Fire series in 2000 with his novel “1632.” Intended as a stand-alone novel, it tells the story of Grantville, a West Virginia town switched in time and place with an equal area of space in Thirty-Years War Germany. 1632 proved addictive to readers and writers. Flint wrote a sequel, inviting David Weber to collaborate. Readers ate it up. Flint then opened his playground to other writers, curating the results.  As of 2020 there are over 30 books in the series. There are few better pure storytellers than Eric Flint and David Freer. Individually they’re entertaining. Together, the result is splendid. “All the Plagues of Hell,” by Eric Flint and David Freer is the latest novel in the Heirs of Alexandria fantasy series. Set in the middle of the 15th century, it’s alternate history. In this world magic works.

This book centers on Count Kazimierz Mindaug, a long-standing series villain. A Lithuanian nobleman, he fled Lithuania after a failed attempt to kill its leader, Duke Jagiellon (possessed by the demon Chernobog). Mindaug took shelter in Hungary serving the evil King Emeric of Hungary and Countess Elizabeth Barthody. Both were killed earlier in the series. Mindaug escaped, but their destruction left Mindaug with no protector against Chernobog, vengefully pursuing Mindaug.

“Rules were made to be broken.”

“Don’t disagree. Indeed they are. Providing, however, that the one breaking the rules is willing to pay the price for it, and the price gets charged in full … Otherwise breaking rules becomes the province of brats instead of heroes. Fastest way I can think of to turn serious political affairs into a playpen. A civilized society needs a conscience, and conscience can’t be developed without martyrs — real ones — against which a nation can measure its crimes and sins.” — Eric Flint, Crown of Slaves

I write a weekly book review for the Daily News of Galveston County. (It is not the biggest daily newspaper in Texas, but it is the oldest.) My review normally appears Friday. After it appears, I post it Sunday on Ricochet. Seawriter Book Review A space adventure with a touch of drama By MARK LARDAS Preview Open

I write a weekly book review for the Daily News of Galveston County. (It is not the biggest daily newspaper in Texas, but it is the oldest.) My review normally appears Sunday. When it appears, I post the previous week’s review on Ricochet. Seawriter Book Review  Alternative era of warring empires Posted: Saturday, February 4, 2017 10:00 […]