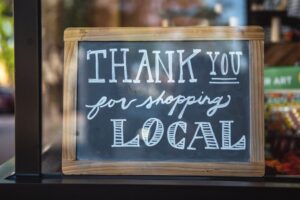 “I have run two small businesses in Kansas, and I have seen how government can crush entrepreneurism. That’s why I ran for Congress. It just so happens that there are a lot of people in south central Kansas who agree with me on that.” — Mike Pompeo

My initial reaction to Secretary Pompeo’s quotation is that he was not your average legislator. He actually knew something about running a business:

As a businessman, Pompeo is perhaps best known for co-founding Thayer Aerospace with some of his classmates from West Point. A specialized aircraft machinery manufacturer based in Kansas, Thayer expanded through investments from venture capital groups including Koch Venture Capital, a fund run by billionaire investors Charles and David Koch. . .

I live near Little Asia in Mesa. This commercial community has been flourishing, revitalizing a portion of a run-down part of town. The latest good sign is the opening of an H Mart. This is a Korean-American supermarket chain with everything from inexpensive to luxury items. The store opened as Arizona started recovering from the governor’s knee on disfavored businesses’ necks. The parking lot is full, every day. This entrepreneurial audacity is worth celebrating this Independence Day weekend. You can see the lettering on the entry all the way across the parking lot. In huge block letters, this company set out its policy, before any state or local official edict:

I received a Lands End catalog about ten days ago. It typically offers a 40 percent off code, but this time it was 50 percent. I decided to splurge and purchase a new swimsuit and a couple pairs of shorts. I’ve been ordering from Lands End for years, and upon dialing the 800 number, I […] If I were a student submitting an essay to Barkha Herman’s entrepreneur essay contest, I would propose . . . wait for it . . . a drive-through grocery stop.  So many times, I’ve been in town for hours and it’s getting late, but I still have a couple more errands. I’ve got an almost thirty-minute […]

How should a failing company manage employee compensation? There is a common expectation that employees should share a company’s success by way of periodic increases to compensation. But, if so, shouldn’t employees also share by degrees in their company’s struggles? Do our laws allow such fluidity of compensation? It has recently been reported that the […]

Business in the Front, Party in the Back
Ricochet Audio Network · 2 Likes

Daily Dish: Raid update, Tucker is back, and more
Mock and Daisy