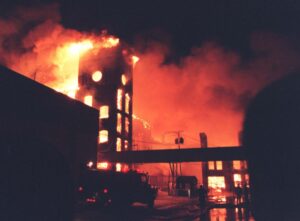 “THIS is how you treat people!” I proclaimed, a quiver in my voice.

Just before Christmas, 1995 a textile mill in Lawrence, Massachusetts was destroyed by fire. About 1,400 people worked at Malden Mills. The owner of the mill, Aaron Feuerstein, spoke before the employees’ days after the fire. “I am not throwing people out of work two weeks before Christmas,” was his famous line. Feuerstein then and there declared that he would pay his workers their wages, even though the mill was closed, and they could not work.

It was early in 1996 that an NBC News feature covered the incident. Feuerstein’s reputation as a beneficent corporate citizen soared. Feuerstein continued to pay his workers for months – without a product being produced – while the mill was being rebuilt. I showed that news story to my high school students for years, always ending with my line above, “THIS is how you treat people.” 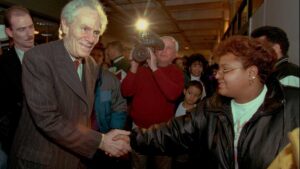 It seems corporate America is overrun with managers these days; they multiply overnight…and generally not in a good way. Simply because someone is given the title does not necessarily suggest they deserve the role. Effective, gifted managers are not a contrivance; they are groomed and educated to direct others. There should be nothing haphazard or […]

While waiting for my turn to see the doctor, I was surprised to see a large yellow dog stroll up behind the receptionist’s desk. Then he noticed me and stood with his front paws on the counter to get a better look. I was charmed. When he came out into the waiting room, I greeted him and let him sniff my belongings. It was comical, too, to find that on my way to the restroom, he was padding down the hall behind me.

I pumped the assistant who was taking my blood pressure. Whose dog was this? It had been newly adopted by the doctor, she explained. Since he lived on a rural property, he didn’t want to leave the animal all day to have it wander off. So was this a temporary arrangement? I wondered. The assistant replied that yes, it was, probably. She betrayed no emotions on the subject, for or against. The receptionist had also appeared to have zero opinions regarding her assistant greeter.

One Small Step Back to Equal Justice and Liberty? Pray It Is So.
Jim George · 47 Likes