I think that Comey has now been wrong twice. First, he didn’t have the authority in the summer to decide whether to bring charges based on the evidence that the FBI had gathered on Hillary Clinton’s private e-mail server. That is up to the Justice Department’s prosecutors. He was also wrong on the reading of the criminal statute on misusing classified material, which is why that decision is up to the prosecutors, not the investigators.

Second, Comey is wrong to disclose the restart of the investigation over the weekend into the evidence — he has apparently violated DOJ internal guidelines and historical practice. The only similar example that I can think of was Lawrence Walsh, as independent prosecutor, naming Caspar Weinberger as a criminal suspect right before the 1992 elections — an example which shows why current guidelines are right. Hillary held a Friday afternoon press conference to address the FBI Director James Comey’s blockbuster decision to review new evidence in its investigation into her email server. The event lasted a whopping four minutes; here it is in its entirety:

This is behind a paywall, but well worth it if you have a subscription. As James Carville says: “just another in the long line of so-called Clinton scandals that will amount to diddly squat.” Preview Open What’s that? It’s a Friday before a holiday weekend? Time for a Clinton document dump!

Today the FBI is releasing a summary of former Secretary of State Hillary Clinton’s July 2, 2016 interview with the FBI concerning allegations that classified information was improperly stored or transmitted on a personal e-mail server she used during her tenure. We also are releasing a factual summary of the FBI’s investigation into this matter. We are making these materials available to the public in the interest of transparency and in response to numerous Freedom of Information Act (FOIA) requests. Appropriate redactions have been made for classified information or other material exempt from disclosure under FOIA. Additional information related to this investigation that the FBI releases in the future will be placed on The Vault, the FBI’s electronic FOIA library.

The Clinton campaign thanks you for your timing, FBI. You can view the documents here. Feel free to let us know what you find.

Politico reports that the State Department inspector general has concluded that Hillary Clinton violated State’s recordkeeping protocols. The finding is contained in a much anticipated report provided to Congress today.

Significantly, the report also reveals that Clinton and her top aides at State — Cheryl Mills, Jake Sullivan, Huma Abedin, and possibly others — refused to cooperate with the IG’s investigation despite the IG’s requests that they submit to interviews. Reach deep into the darkest recesses of your memories — way back in the distant past of August 8. A film called Mission: Impossible – Rogue Nation was in the theaters, there was a war going on in Syria, and Donald Trump was making rude comments about reporters and Republicans.

Back in that sepia-toned era, Hillary Clinton issued a sworn declaration that she had turned over all her work-related emails to the State Department. Yes, she might have wiped her server free of Groupons from Chipotle and Bikram Yoga, but under threat of perjury she promised to have been completely forthcoming in her official communications. President Nixon got in a world of hurt over a missing 18½ minutes of audio tape. What a piker:

Hillary Clinton’s presidential campaign has faltered over her use of a private e-mail server and account for professional and personal matters while Secretary of State.

Agriculture Secretary and former Iowa Governor Tom Vilsack endorsed Hillary Clinton at a small ceremony Wednesday. As he delivered his bland statement, he made an impromptu joke about Clinton’s growing email scandal, calling it “Trumped up charges.” (Get it? “Trump?” You can see why Tom chose a life in politics instead of comedy.)

But Hillary thought the joke was a laugh riot: 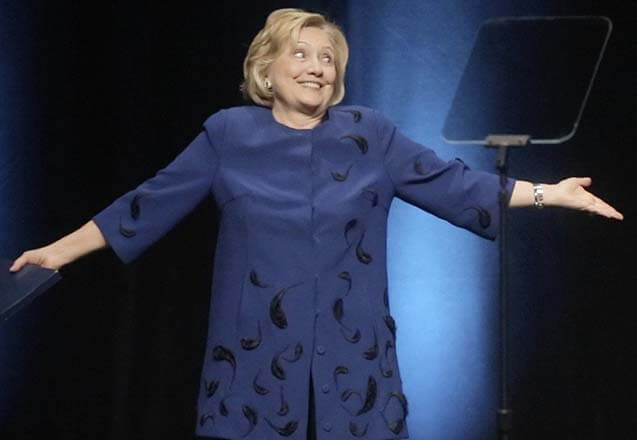 Hillary Clinton and the Democratic Party met on the brink of a presidential election. The Clinton asked the party to carry her on its back to the nomination. The party asked, “How do I know you won’t sting me?” The Clinton said, “Because if I do, I will go down with you.”

The party was satisfied, so they set out. But in midstream, the Clinton stung the party. The party felt the onset of defeat and began to panic, knowing they both would go down. It had just enough time to gasp “Why?”

Someone That I Used To Know
Keith Lowery · 25 Likes