Honest question–why have the vote count percentages for Arizona and Nevada not moved much at all today?  I’ve periodically been checking Fox News throughout the day, and Arizona’s been stuck around 66% and Nevada around 77%.  Is that correct?  Does anyone know whether there are still huge numbers of votes to be counted?  Thanks. **UPDATE:  […]

Fascinating poll results — inasmuch as we can trust polling — but . . . I would love to hear your responses to this question: “Why are Gen-Xers, uniquely among the age groups, so strongly Republican and weakly Democratic?“ Preview Open

Over at spectatorworld.com, today’s lead article is titled Bill Maher is Saying What Liberals Are Thinking. It is a lengthy interview of himself by James Kirchick. As conservatives have been tantalized by some of Maher’s comments, the speculation is that Maher is slowly moving to the right. it would be well that some attention be given […]

It was January, in the year twenty twenty-one
I was out at White Pass skiing down a black diamond run
And at dinner time, we stopped and skied back to the lodge to eat
And Mama hollered out the lodge door, “git them ski boots off your feet”
And then she said, “I got some news this mornin’ from channel 4”
“Today Biden was sworn in, and we haven’t seen worse before”

Unless you’re a long-time legislative redistricting activist or watcher, you’d be forgiven for not knowing who the late U.S. Rep. Phil Burton (D-CA) was.

Burton, a hard lefty and an intensely partisan Democrat, enjoyed encyclopedic knowledge of California geography and demographics. Elected to the California legislature in 1956, he was in charge of redistricting right after the 1960 census. In 1964, he was elected to the U.S. House from San Francisco. Along with this brother and fellow U.S. Rep. John Burton, he engineered subsequent drawings of California’s congressional lines to ensure our largest state’s delegation was solidly Democratic, at least until he passed away in 1983.

Returns are starting to come in. Korean presidents serve one five-year term, after which they either go into exile, commit suicide or go to prison. (Rimshot.) Why should we care? Current President Moon’s Democratic Party is shifting the country more into appeasement mode with North Korea and China, and away from a close relationship with […]

The election is next Wednesday, and while this guy is running in sixth, on a downright metaphysical platform of kookdom, I thought you might be amused/horrified. Preview Open

Hubwonk host Joe Selvaggi talks with constitutional scholar Thomas Berry about the process for electing U.S. presidents and the efforts underway to modernize the Electoral Count Act of 1887 to forestall frivolous challenges in the future.

In this entry from the Martini Shot archives (OK, it’s actually a thumb drive), Rob offers some advice for the newly inaugurated President Biden based on his years (and more years) of show biz experience. 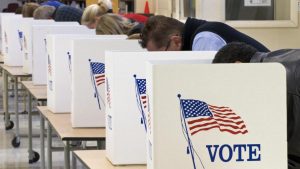 The Democrats’ “For The People Act” ain’t it. Increasing numbers of people are waking up to realize that HR 1, passed narrowly by the US House of Representatives late Wednesday, may qualify as the worst legislation ever adopted by one of our congressional chambers. That’s no exaggeration. Having said that, House Democrats passed a similar bill in the past (2019), but with Donald Trump in the White House and Republicans in control of the Senate, it didn’t matter.

It does now. If Sens. Joe Manchin (D-WV) and Kristin Sinema (D-AZ), both Democrats who claim to oppose ending the filibuster cave on the matter, with this bill as its vehicle, it could become law. Fingers crossed. It may be a close call. Pressure will no doubt be applied.

I won’t go into the bill’s voluminous flaws here. That’s been done extensively and in great detail by several excellent organizations and journalists, including the Public Interest Legal Foundation, the Institute for Free Speech, the Heritage Foundation, and others. A quick, top-line summary can be found here, courtesy of the Washington Examiner.