Many of us saw it coming after surprising results from “Election Day.” At this writing, another Republican lost after a painfully slow recount in an all-mail ballot election, several days after “Election Day,” a now-quaint notion. Thanks to all manner of early voting schemes, in person and via mail, we now have “Election Season.” No […]

Mike Rounds, a US Senator from one of the big rectangular states in what the coastal elites call “flyover country,” went on former Bill Clinton advisor George Stephanoupoulos’s Sunday show and declared unequivocally, “The (2020) election was fair, as fair as we have seen.” Rounds claimed he had “looked at” claims of widespread irregularities in the 2020 election and didn’t find them credible. (By “looked into” I just assume he means he watched CNN dismiss all the many irregularities in the 2020 election as conspiracy theories.)  Rounds was later backed up by fellow Senate Republicans, including Senator “Pierre Delecto” of Utah. “Mike Rounds speaks truth knowing that our Republic depends upon it.”

All right, then, let’s take the Bush Republicans at their word that the 2020 elections were completely fine. That it didn’t matter that states run by Democrats changed election laws unilaterally and in many cases without going through the legislature. That these blue-state governors sent out millions of ballots (like junk mail) to every name on voter registration lists that had not been updated for 30 years or more; that Democratic Party activists were allowed to harvest these ballots and drop them by the thousands into unsecured drop boxes without any chain-of-custody documentation or even the most rudimentary verification. If they really think that’s the right way to run an election, then why do these same Republicans not support the Democrat “voting rights” bill that would codify these practices as the national election standard?

The Epoch Times has just reported that Senator Manchin will vote against H.R. 1, which, if passed, would federalize our elections and, I think,  make the continuation of the republic as it stands practically impossible.  I don’t know about you but I’m going to send him a donation.  Maybe this is just political survival for him, […] 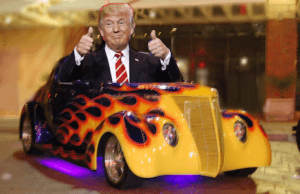 Last March, when public schools and college campuses announced their closing in states all over the nation, and the lockdown quickly tightened on small businesses everywhere, the message coming from “pro Covid” forces was as follows: “This will not go away any time soon.” Their assessment proved correct, empowered as it was by determination. Preview […]