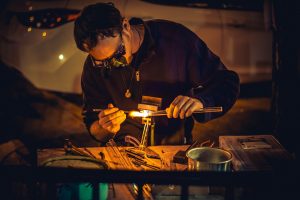 A husband and father to three children, Dan Allen has been receiving a vast array of city, state, and federal unemployment benefits since being furloughed from his job when the COVID-19 crisis struck last March. Nevertheless, Mr. Allen and millions of Americans just like him are learning the hard way that government largesse just isn’t enough. Shortly after the initial lockdown last spring, Allen decided to swallow his pride and return to work.

“I’m not proud of it. But my wife and I sat down and crunched the numbers and there was no way around it: I was going to have to begin earning again,” he said.

Policymakers in Washington are struggling to deal with a problem that has perplexed public officials since the New Deal: how to keep people from relying on work to support themselves?

Oren Cass joins City Journal editor Brian Anderson to discuss his new book, The Once and Future Worker: A Vision for the Renewal of Work in America.

The American worker is in crisis. Wages have stagnated for more than a generation, and reliance on welfare programs has surged. Life expectancy is falling as substance abuse and obesity rates climb. Work and its future has become a central topic for City Journal: in 2017, the magazine published its special issue, The Shape of Work to Come.

Milton Ezrati joins Seth Barron to discuss President Trump’s talk of tariffs, China’s vulnerability in a potential trade war with the United States, and the history of the global trade order.

A tumultuous recent meeting of the G7 nations, trade disputes with Canada, and tariff threats against China all point to a shakeup of world trade. While the global economy would likely suffer in a trade war, Ezrati argues that the U.S. actually has the upper hand in trade negotiations with Beijing.

Having recently moved to the greater Washington DC area, I am in need of a new job.  Our own Mollie Hemingway suggested adding my resume to the Heritage Foundation Job Bank.  Applicants submit their resumes so that think tanks, politicians, and other organizations have a pool of politically-engaged potential employees to start their hiring process. […]

If nothing else, Conservatives agree that the purpose of government is to conduct a foriegn policy that is in the best interest of its citizens. This imperative is so strong, that it’s often permissible to cause the deaths of innocent foreigners as long as the government is carrying out its citizen’s interest in a reasonable manner. Where […]

Back in 1994 and 1995, Disney created an animated series based on its popular movie Arabian Nights. Following the direct to VHS sequel The Return of Jafar, the Aladdin series continues the adventures of the title character and friends. Now in one of the episodes, “Power to the Parrot” involves Iago (voiced by Gilbert Gottfried), […] The Federal Reserve was expected today to end quantitative easing, and it did.

Then there was this question, from a woman, re: Men
GrannyDude · 14 Likes