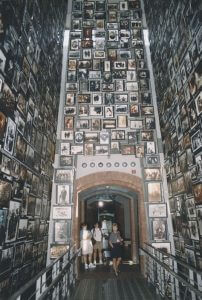 It’s not often I claim I’ve read a book that has changed my life. But this one did. And I thank @ontheleftcoast for telling me about it. Although I have studied the Holocaust over the years, I had never read a story about life in the shtetl, a small town with primarily Jewish residents in Eastern Europe.

This book, There Once was a World, was written by Yaffa Eliach, whose parents were Moshe and Zipporah Sonenson. This family, prosperous in Eishyshok terms, was also a pillar of the community, generous, compassionate, learned, and devoted to Judaism. The book also provided stories of individuals and families, and descriptions of Jewish life, from Torah study to the requirements of the faith.

The reason I was moved so deeply by the book was that, unlike many stories I have read about the Holocaust, with all its tragedies, human depravity, and horror, I had never read so many stories of individuals in one community: people with names, personalities, duties, and devotion to the Torah. Their lives, unlike the Jews in other urban cities in Europe, were difficult and demanding.

In case you missed the recent, startling post over the weekend by @teunisdorlas called “The Ukraine”, it’s worth your time. http://ricochet.com/446503/ukraine/ Preview Open

On this episode of Whiskey Politics, we discuss President Trump’s recent speech in Poland, paying NATO, the reality of two Europes, Immigration, Putin, Brexit, and much more with Melissa O’Sullivan, the Deputy Director of the Danube Institute in Budapest, Hungary, and Washington DC. Melissa represents the Danube Institute through her involvement with the International Women’s Club and other organizations. A former professional in the field of security working with the federal government, she is a graduate of the University of Alabama and a commentator on the political scene on both sides of the Atlantic. Melissa works with her husband John O’Sullivan, former senior policy writer and speechwriter for Margaret Thatcher when she was British prime minister, Editor at National Review, and former Editor in Chief at UPI.

Just this morning while running on my elliptical machine I resumed listening to the lecture series A History of Eastern Europe by Professor Vejas Gabriel Liulevicius. It’s part of The Great Courses series. I’m now listening to the chapter about the 1980 strike at the Gdansk shipyard. I’ve also read about it in other books, […]

So reports The New York Times:

President Obama plans to substantially increase the deployment of heavy weapons, armored vehicles and other equipment to NATO countries in Central and Eastern Europe, a move that administration officials said was aimed at deterring Russia from further aggression in the region.

Russian Foreign Minister Sergei Lavrov called on the US to push Kiev into giving up its military campaign against pro-Russia rebels in the east and negotiate a political compromise, as an influx of support for the rebels from Russia began reversing Ukrainian gains on the battlefield. “It’s imperative to moderate the ‘party of war’ in […]

What does it say about Western nations that we are more inclined to punish Putin for an isolated terrorist attack than for a war? Preview Open