Hubwonk host Joe Selvaggi talks with Pioneer Institute’s Dr. Bill Smith about his recently released paper entitled, “340B Drug Discounts, An Increasingly Dysfunctional Federal Program,” which analyzes the evolution of a well-intentioned program to offer discounted drugs to the uninsured from a benefit that had helped charitable hospitals to one that has exploded to generate billions in profits while serving fewer uninsured.

William S. Smith is Senior Fellow and Director of the Life Sciences Initiative at Pioneer Institute. He has 25 years of experience in government and in corporate roles, including as vice president of public affairs and policy at Pfizer, and as a consultant to major pharmaceutical, biotechnology and medical device companies. He held senior staff positions for the Republican House leadership on Capitol Hill, the White House, and in the Massachusetts Governor’s office. He earned his PhD with distinction at The Catholic University of America (CUA).

Hubwonk host Joe Selvaggi talks with Pioneer Institute visiting fellow Dr. Bill Smith about Quality Adjusted Life Years (QALY) standards, and the ways in which so-called objective cost-containing strategies use expert opinion to determine the value of a life and thereby disadvantage the elderly, disabled, and those with less common vulnerabilities to disease. 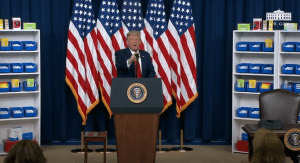 President Trump signed a stunning set of executive orders on Friday. He fundamentally restructured drug pricing and availability. He used his pen, apparently after years of legal and administrative review, to do what the congressional Republican’ts and Democrats have only postured about for decades. The president spoke with commonsense and indignity on behalf of ordinary Americans against Washington and global elites. At the same time, he characterized the big drug companies as great innovators, key to beating the Chinese virus, who are just stuck in the system. This is a negotiating posture, as those CEOs have been part of the rigged game.

President Trump is massively driving down the outrageously inflated prices of insulin and EpiPens. He is ending the crooked practice of middlemen pocketing large manufacturer discounts, leaving the retail pharmacy and the consumer with much higher prices. Note the manufacturers had already given the discounts; the discounts just were not getting to the pharmacy counter.

Not only did the president speak, he had others drive home the points. An insulin-dependent senior citizen spoke powerfully. A dental hygienist, widowed years ago with twin 4-year olds, spoke of the “unaffordable care act.” She spoke of a 15-year-old EpiPen, which had gone from perhaps $20 copay to $750 per EpiPen. She spoke of $75,000 in medical debt and praised President Trump for saving a single mother hundreds of dollars a month.

Richard Epstein examines the Lefts’ push for single-payer health care and explains why such systems are destined for failure.

Another drug company has announced that they will make the infamous Daraprim for a dollar, undercutting Turing Pharmaceutical’sjacked-up price. The government started anti-trust proceedings against Turing about a week ago. So it would seem the govt could just drop that suit and let the market solve this. Buuuuut… Imprimis’ drug is a compound with another […]

Recently, the Wall Street Journal has published several articles discussing the very high prices attached to many new pharmaceutical agents, and what can be done about this problem. Most proposals aimed at “fixing” it, of course, have to do with instituting government price controls. Drug companies argue that it now takes an average of $2.6 […]

Then there was this question, from a woman, re: Men
GrannyDude · 14 Likes