When I was a boy, I wanted to be an astronaut. My favorite TV program was “Lost in Space.” I remember fervently praying that I would be allowed to be someone who could travel to distant stars. [I became a theologian instead. Some may see a connection there. 😊] Coupled with my space odyssey, I […] 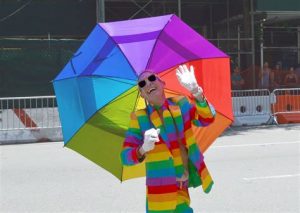 The last time I chatted with someone in a public place, we were discussing the change of local lizards this year. We usually see mostly green anoles — “chameleons” that can change from green to brown at will. But this year brown anoles — striped cousins that can’t change color — are all one sees. […]

https://pjmedia.com/columns/megan-fox/2020/08/13/media-silent-after-white-5-year-old-shot-dead-in-front-of-family-by-black-neighbor-n787345 Are the “main” press outlets just trying to keep this quiet so they don’t start stomping some downtown, or camping in some park, or painting the streets? Preview Open My sweet little old Scottish mother died in October 2016.  At the time, my brother was the head coach of a soccer team at a Cal State. He had been a soccer star while he attended college there (I think his records still stand) and eventually worked his way up to head coach. Over the […]

‘We speak in English to the monolingual patients and staff, but we speak Spanish with each other because we think in Spanish. But one day they gathered us all together and warned us that if we continued to do so, we would be fired,’ Miranda, a San Juan native, said. ‘But there is no law […]

This is a branch off @rushbabe49 mentioned the proposal in the Texas state legislature to deal with the City of San Antonio’s decision to ban Chick-fil-A from consideration for an airport food concession. Glenn C. Loury of Brown University joined Jason Riley to discuss the persistence of racial inequality in America. Their conversation took place at a Manhattan Institute event in New York City entitled “Barriers To Black Progress: Structural, Cultural, Or Both?”

Professor Loury, who has also taught at Harvard University and Boston University, is a professor of economics, with a focus on race and inequality. He’s published several books, including The Anatomy of Racial Inequality and Race, Incarceration, and American Values.

http://www.bbc.com/capital/story/20180806-how-hidden-bias-can-stop-you-getting-a-job I was just reading the BBC essay above, on problems encountered in the hiring process, and how employers can further eliminate their hidden biases. Some of it was probably helpful but one sentence jumped out at me: Preview Open HI there:First of all, hats off to you and Tucker for the fine shows that are presented 5 evenings out of each week. I am especially pleased with all aspects of the shows that show Trump in a more true light. I am a retired home health aide. I tried very hard to remain true […]

I think the big picture is, If we as a society agree that we can’t manage to interact with our fellow citizens (in personal or commercial relationships, either one) without the federal government always coming in and mediating those relationships for us, then the outcomes in particular cases will sometimes go in favor of the […]

This year marks the 50th anniversary of the passage of the Fair Housing Act, the landmark legislation signed by President Lyndon Johnson aimed to end housing discrimination and residential segregation in America.

I have thought for some time that I ought to unchain myself from Google.  Yes, it has a great search engine.  Chrome is a great browser and is the most widely used.  Gmail is efficient and free.  But, I have become uncomfortable about the loss of privacy. I have a Gmail account for personal stuff.  […]