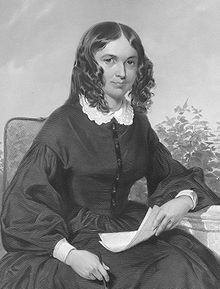 DISCONTENT
Light human nature is too lightly tost
And ruffled without cause, complaining on–
Restless with rest, until, being overthrown,
It learneth to lie quiet. Let a frost
Or a small wasp have crept to the inner-most
Of our ripe peach, or let the wilful sun
Shine westward of our window,–straight we run
A furlong’s sigh as if the world were lost.
But what time through the heart and through the brain
God hath transfixed us,–we, so moved before,
Attain to a calm. Ay, shouldering weights of pain,
We anchor in deep waters, safe from shore,
And hear submissive o’er the stormy main
God’s chartered judgments walk for evermore.
—Elizabeth Barrett Browning

On first glance, Elizabeth Barrett Browning (1805-1855) would seem to have lived a life of privilege and fortune, with little room for discontent or unhappiness anywhere. Her family, which resided in the north of England, was extremely wealthy on both sides, the result of both inheritances and ownership of Jamaican sugar plantations. As the oldest of twelve children, she had a very comfortable upbringing, well-educated, and encouraged in her love of poetry-writing by her mother, who kept every one of her daughter’s notebooks, giving us a fascinating glimpse into Elizabeth’s stylistic and philosophical development as she aged.

By her mid-teens though, she’d become an invalid, suffering with disabling headaches and a loss of mobility. Subsequently, she developed chest and lung pain (probably some form of tuberculosis, combined with a neurological disorder causing frequent and temporary paralysis), and she became dependent on laudanum to ease her pain. As with most drug dependencies, a vicious cycle ensued; and the drugs that eased her suffering on the one hand, made her more frail on the other, and as did many people unfortunate enough to be plagued with complaints of the lungs, her family began a search for more agreeable climes. They moved around the country looking for sun and warmth (rather futilely, if one knows anything about British weather). After the drowning death of her brother in a yachting accident in Devon, she and her family moved to Wimpole Street in London, where the almost-bedridden Elizabeth became an advocate for women’s rights and child labor reforms, and found solace in religion, in which she and her family dissented from the established church.

Who Will Be Crushed When the Arc of the Moral Universe Bends?
GrannyDude · 26 Likes

Why the Raid on Trump’s Home?
Flicker · 23 Likes

The FBI is corrupt to its core
Bryan G. Stephens · 34 Likes

Save the Memes for Henry Jones
Mark Alexander · 28 Likes

The passing of an American hero. Who we don’t deserve.
Dr. Bastiat · 21 Likes

Is Ricochet one of “the darkest corners of the Web”?
Ekosj · 13 Likes