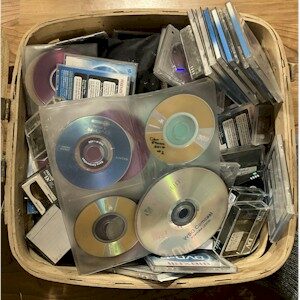 I tried out that phrase, beloved of my father when dealing with a screaming infant, on my 18-month-old niece a few days ago.  She immediately picked it up and responded, “deoo, deoo, deoo,” thus instituting the first two-way conversation we’ve ever had, even if only over the phone.

I’m feeling a bit glum and reflective and have finally–after years of putting it off, dug out the very large picnic basket into which I’ve thrown, over the course of about twenty years, every bit of video I’ve ever recorded (see photo).  It is a disheartening prospect, to say the least.  Hundreds (literally) of DVDs, both mini and full-size, dozens and dozens of digital video cassette tapes, and a considerable quantity of memory cards in all sizes, shapes, and formats. 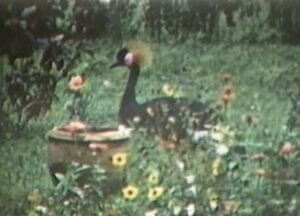 March is a problematic month for me, being one of those two or three in the year in which anniversaries and memories–those both deliriously joyous and desperately sad–seem to congregate and coalesce in an inescapable, and sometimes overwhelming, swarm. My granddaughter’s birthday. Our dinner of grace and the death of Mr. She’s first wife. “Fifteen days to slow the spread” which, although I didn’t know it at the time, would signal the end of any chance for Mr. She and me to escape the house together ever again and go on the slightest or most gentle of expeditions before his death four months later. That moment when I realized that he wasn’t going to pull out of his downward spiral, and that this would be the end. More than one dear friendship lost. Much else of joy. Many other heartbreaks.

And, as always, my Dad. He’d have been 103 this month, and although it may be greedy of me to wish he was still here, it’s not entirely without precedent in my family, which Mr. She used to call “The Dúnedain.” Auntie Betty lived to just a few weeks short of her 103rd birthday; Uncle Arthur was 102 when he shuffled off this mortal coil. Numerous others family members lived well into their 90s. Auntie Pat (thanks for asking and may she live forever) will be 99 in July.

Dad died in 2007 (in September–another of those bloody awful months) at the age of 88. I was lucky to have had him in my life until then. I’d turned 53 the week before, and my sister, brother, and I knew that Dad’s time was almost up.

Last year, on the thirteenth anniversary of my Dad’s death, I posted the story of Jangali 1947, the annual cattle-tax roundup conducted by the newly-assigned colonial officers in the Nigerian bush. Having arrived in Nigeria several months previous and been assigned the task, Dad didn’t waste any time imprinting the process with his own unique signature. As Sir Brian Sharwood Smith put it, in his memoir of his time in Nigeria, But Always as Friends–Northern Nigeria and the Cameroons 1921-1957 (emphasis mine):

The man I chose [to supervise the Sokoto Survey] was a newly joined officer named David Muffett. David was a very large man with an original turn of mind and an inexhaustible fund of energy. He had already achieved prominence by applying a novel technique to the lengthy and exhausting business of supervising the wet season cattle count on which the jangali tax was based. By long established tradition this annual contest between the District Heads, who assessed and collected the tax, helped on occasion by the [District Officer], and the nomad cattle owners, who sought to evade it, had acquired many of the characteristics of an international sporting event. There were rules and a ritual. If the District Head ran his quarry to earth, the Fulani paid up with good grace; if the Fulani contrived to spirit away a few hundred head undetected, there were no hard words. The odds on the whole were pretty evenly balanced, for to counterbalance the mobility of the mounted NA officials, there were large tracts of uninhabited bush in which the cattle could be concealed, and the control of the Fulani over their herds verged on the uncanny. But when David Muffett started chasing cattle across country in his Land Rover, a type of vehicle then barely known in Nigeria, the purists raised their eyebrows.  And many herds crossed over into Niger Province where they felt that they would be accorded more gentlemanly treatment. 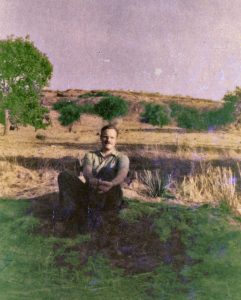 One of the enduring memes (if we had had such a word to describe them at the time) of my childhood would have been my Dad’s invocation of the “gremlin in the petrol tank.” He was prone to bring it up in any situation where something unexpected happened and a thing that was supposed to have taken a finite amount of time, or achieved a particular outcome, either disappointed in the first instance, or didn’t perform as advertised in the second. Over time, we kids began to take it for granted. “Oh, yeah. There’s must be a gremlin in the petrol tank. No wonder it took so long.  No wonder it didn’t work.”

But, as we grew up, and as we demanded more in the way of Science! dare I say, we began to doubt. Was Dad simply saying this to cover up a defect in planning or execution? Or was there, as Paul Harvey might have said, a “rest of the story?” Dear readers, in Dad’s own words–on what would have been his 102nd birthday–here’s the “rest of the story,” told through the eyes of a young and vulnerable Dad.

The events recounted here took place in 1947 or so; he’d have been in his late twenties and hadn’t been in Nigeria very long. (For the record, I have no knowledge of the “girl in Lincolnshire,” who appears in this tale rather like Coleridge’s “person from Porlock” and as far as I know, she is never mentioned again anywhere in Dad’s writings. I’m just grateful she took herself off and left the field clear for my mother. Otherwise, there wouldn’t have been a me, and I wouldn’t have had such a Dad. But here I am. And without further ado, here he is, too): 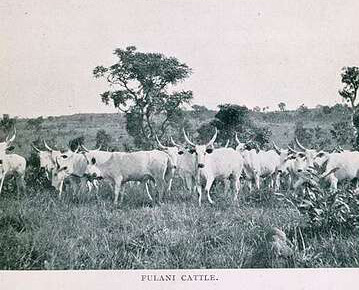 EVERY YEAR, about October/November a cattle tax of one-shilling-a-head was levied on every bull, steer, cow or calf throughout all the cattle-holding provinces of Northern Nigeria. This was in accordance with the principle that in order to establish sovereignty of the Crown, every adult in the territory had to pay an appropriate yearly tax to the government. Each Native Authority was responsible for collecting the tax in its own area. The greater part of it was retained by the NA that collected it, and this paid for the salaries of its servants and for the public services that it provided, but a small portion each year was directed to the central government and was then paid into various local government treasuries, thereby maintaining the principle of an appropriate tribute.

Farmers, craftsmen, and employees paid haraji (general tax) set at around ten shillings a head each, while traders, entrepreneurs, and the wealthy were assessed by the NA at sums that could go as high as 10% of estimated profits. (Complaints were heard through a formal review process led by the District Officer, and could result in the tax being decreased or, in rare cases, increased.) In really primitive areas things were simpler, with living-huts being made the basis of taxation and assessed at one shilling each per annum. Nomads, however, who were never settled in any one place, created their own problems and chief amongst these was the question of what to do about taxing the Bororoji (wandering Fulani).

For centuries, the Fulani people had been regarded as an elite. By the eighteenth century, they had fully emerged all over the Western Sudan as brave, resourceful, learned, competent, and capable, with a bent for religious orthodoxy and proselytization, as well as for administration and government.

Rosie: Rest of the Meme
Mark A., Dubious Authority · 31 Likes

This is my Story!
Bob Thompson · 20 Likes