This week on Hubwonk, host Joe Selvaggi talks with Dr. Beth Akers, AEI Senior Fellow, about the recent presidential executive order to cancel an estimated $500 billion in outstanding student debt. They explore who benefits, who pays, and the likely effects on tuition and the borrowing habits of future students.

This week on “The Learning Curve,” co-hosts Gerard Robinson and Cara Candal talk with Dr. Matthew Chingos, who directs the Center on Education Data and Policy at the Urban Institute. They discuss the “Year of School Choice,” the welcome 2021 trend of states across America expanding or establishing private school choice programs. Dr. Chingos describes the gradual evolution of private school choice programs from primarily school vouchers to tax credit scholarships and education savings account programs (ESAs), which have been growing in popularity, and how charter public schools fit into this growing portfolio. He offers thoughts, as a researcher and scholar, on how using data to analyze, enhance, critique, and hold schools accountable for students’ academic improvements has transformed K-12 policy discussions, and how COVID-19’s discontinuities will impact accountability and decision making. They explore another topic of Dr. Chingos’ research, the $1.6 trillion student loan debt crisis, reasons why tuition has skyrocketed, and some of the possible pathways forward. Lastly, he shares views on issues of academic quality within higher education, and whether colleges and universities have lost their sense of mission.

Stories of the Week: In California, where only 32 percent of the state’s fourth graders were performing at or above proficient in reading, a proposed ballot measure is taking aim at those practices that protect ineffective K-12 teaching. Despite being the home of tech giants like Google, Facebook, Microsoft, and Amazon, the state of Washington has reported that a mere 9 percent of its public high school students were enrolled in computer science courses during the 2019-20 school year. 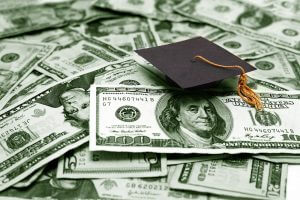 One looming issue facing the incoming Biden administration is what to do with the $1.7 trillion in outstanding student loans, mostly held by the federal government. The most recent internal government analysis found that the United States will lose about $400 billion on its current portfolio of $1.37 trillion, a number likely to increase as the government continues to allocate about $100 billion per year in new student loans. Notably, that analysis did not include the roughly $150 billion in loans backed by the federal government but originated by private lenders.

By way of comparison, private lender losses on subprime loans in the residential lending market were about $535 billion during the 2008 crisis. The student loan and subprime mortgage crises share the same root cause: by statutory design, the government wished to expand both markets, such that loans were made with little or no examination of the borrowers’ creditworthiness. The meltdown of the residential home market arose because private lenders relied on the implicit federal loan guarantee. In the end, this practice pushed Fannie Mae and Freddie Mac, the holders of weak mortgages, over the edge, and ultimately resulted in the wipeout of all the private common and preferred shareholders of the two companies.

Fortunately, the absence of private shareholders ensures that the student loan crisis is not likely to generate such chilling collateral consequences. But the problem of borrower defaults will not go away soon, given that the federal government continues to pump billions of dollars each year into student loans. Unfortunately, this constant infusion of new capital into the lending market is causing increases in college tuition that outstrip inflation, imposing additional costs on individuals who do not take out student loans, and raising the overall cost of education above competitive rates.

Caller #1: OK, so I got my degree? From East Virginia University? In like Art History and Diversity Studies? You’ve probably read my seminal thesis, Cross-Dressing in Indigenous Fabricators of Submerged Woven Containment Vessels on Lake Titicaca, An Intersectional Analysis?

Two news items from Arizona prompt further thoughts on education and election reform. Tempe, Arizona, home of the main Arizona State University campus just had their municipal election this week, and the results may trip a 2018 Arizona law that does much of what I advocated in “Two Simple 2020 Initiatives to Change the Political […] With the federal Department of Education now overseeing $1.2 trillion in student-loan debt, attention has been driven to the cost of tuition at our institutions of higher education. While it may appear that the causation runs from higher tuition to student debt, it’s more likely that it runs the other way.

When the federal government attempted to increase the number of low-income homeowners by requiring banks to increase the percentage of their loans to low-income households, and by purchasing mortgages through Fannie Mae and Freddie Mac, the result was a sustained increase in housing prices and a vast expansion of mortgage debt. We’re pretty well aware of how that ended up.

We should not be surprised that, as the federal government expanded its role in higher education through Pell Grants and loans to students without regard for their ability to pay the loans back, tuition has risen. Over the past 30 years, tuition has risen by 146 percent at private four-year colleges, to $31,231 (in constant 2014 dollars). The increase for in-state tuition at public four-year institutions has risen 225 percent, to $9,139.

The State of the Union Is Meaningless
Jon Gabriel, Ed. · 33 Likes