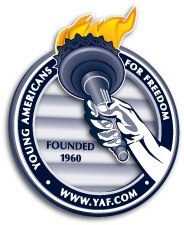 For those of us who despair that our young people have been indoctrinated to hate America, there is hope.

In this article in The Federalist, we learn that students all over the country on college campuses are planting our flag to commemorate the tragedy of 9/11. In spite of efforts by the Left to downplay this holiday, and blaming America for its occurrence, students at more than 200 schools are letting the world know the importance of this calamity, and that it is worth commemorating. Those students know that Islamic terrorism is still a threat, and that we need to remember those who lost their lives to its horrors on 9/11.

I’m grateful that these students have chosen to never forget.

Isaac Schorr returns to go over the somewhat dispiriting results of a YAF poll that revealed the extent of young people’s liberalism, and to try to figure out what, if anything, can be done about it. At the University of Tulsa in Oklahoma, Professor Jacob Howland writes in City Journal, “a new administration has turned a once-vibrant academic institution with a $1.1 billion endowment and a national reputation in core liberal arts subjects into a glorified trade school with a social-justice agenda.” Speaking with Seth Barron, Howland describes how, in early April, TU’s new administration announced a wholesale reorganization of academic departments, including the elimination of traditional liberal arts majors. Students and faculty have responded by organizing protests and launching a petition to “save the heart and soul of the University of Tulsa.”

Richard Epstein looks at recent on-campus controversies involving Charles Murray and Milo Yiannopoulos and examines what can be done about the increasingly hostile environment in American higher education. The New York Times recently published an article that provides a glimpse into the microaggression movement currently infecting college campuses. The article profiles Sheree Marlowe, the chief diversity officer at Clark University, where she teaches incoming freshmen how to identify and avoid microaggressions. Here are a few tips Marlowe provided to the students attending one of her recent “training” sessions:

Marlowe knows her stuff. Just ask her. Or does she? Consider this exchange she had with a student:

But some students appeared slightly confused. “My boy, we are pilgrims in an unholy land.” — Dr. Henry Jones Sr., on watching a Nazi book burning in Indiana Jones and the Last Crusade.

I am a recent college graduate and a young Republican. The happiest moment in my short political life so far has been receiving a piece of paper, freeing me from the encroaching liberal bonfire of the modern college campus. What I’ve learned from my time in academia is probably not the most conventional lesson, but it is the most practical: don’t be an activist; just get through it. Accept that college and university is not a friendly place to express counter-cultural views, focus on strengthening your conservative beliefs, and get that diploma.

What got me through college was keeping my ideological head down and a healthy dose of underhanded sarcasm. Let me be perfectly honest: no one likes the campus activist — be he from the right or the left — or the kid who argues with the professor. Seriously. Just keep your mouth shut and parrot back whatever he/she/xhe wants to hear. Although it may be romantic to stand up for one’s beliefs in the middle of the lecture and tell-off that smug liberal professor, please don’t. It’s not a good look and, more importantly, the guy you’re laying into also grades your papers.

There is nothing wrong with being in an unequal relationship. Indeed, I think that every relationship is unequal in at least some respects. But that is OK. It is not a moral failing to be a baby, or a parent, or in a wheelchair. This is not a bug: it is a feature. This […]

Yik Yak, a controversial social media app, has colleges embroiled in debate as to the proper extents of speech on campuses. Yik Yak is a program that gives the user a “a live feed of what everyone’s saying around you.” On campuses around the country this can lead to predictable results when you combine adolescents, newly freed from the control of their parents, with the ability to spontaneously broadcast whatever they happen to be feeling in that moment within a 10-mile radius.

As noted by one writer at LSU, the results can often be what is popularly considered “hate speech.” Noting some of the truly terrible things that her fellow students feel free to share through the app, she writes: