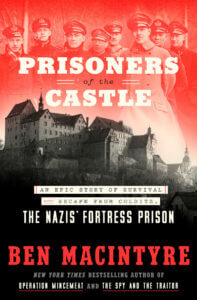 Colditz was a World War II prisoner-of-war camp run by Germany. It was the place incorrigible escapers and special political prisoners were sent. It is one of the best-known German POW camps, thanks to one escapee, P. R. Reid. Postwar, he wrote a book about his exploits, giving birth to a genre of escape literature about Colditz castle.

“Prisoners of the Castle: An Epic Story of Survival and Escape from Colditz, the Nazis’ Fortress Prison,” by Ben MacIntyre is the latest edition to the canon. MacIntyre takes a fresh look at the castle adding new research to previously published sources. Can anything be added to the story? The answer is yes.

Time has distanced us from the events at Colditz during World War II. The participants are all dead. The Iron Curtain, which separated those writing about the story from where the story took place, has fallen, allowing free Western access to Colditz castle. MacIntyre takes advantage of all of this to provide an unparalleled look at what happened.

Who Are You to Question Your Savior?
Dr. Bastiat · 46 Likes

The State of the Union Is Meaningless
Jon Gabriel, Ed. · 27 Likes