What you are about to read is an actual conversation I had with the AI known as ChatGPT. Aside from the pleasantries at the beginning of the conversation, what you will read is the entire, unedited, discussion until its unfortunate conclusion. The only edits I will make will be to edit out my email address and to identify the comments made by Chat GPT. For my part, I used my phone’s voice type to ask questions or make statements. Any errors there are on the part of Android. Please note that Chat GPT still got the gist of my statements/questions despite the typos.

Yep, another issue of Living Bird has come in the mail! And each such arrival is an occasion. But before I get into this latest one, I’d like to mention two biological data I came across in my recent book readings. First, Donald Keene spoke of the toki, a bird that was in the very […]

What are the facts about climate change? Well, that depends on whom you ask. Meteorologists are not in total agreement about next week’s weather, much less the 50-year forecast. Similarly, scientists were not in universal agreement on how to respond to the COVID pandemic. Remember how Drs. Anthony Fauci and Frances Collins vehemently disputed the Great Barrington Declaration?

Since scientists don’t agree, one admittedly simplistic option would be to consider your own personal common sense observations about the climate. In my personal 60-year experience, the southwest U.S. does seem warmer and drier than in my youth. 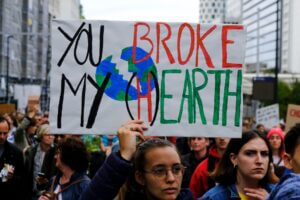 Protesters take part in the Walk for Your Future climate march ahead of COP27 in Brussels, Belgium, on Oct. 23.

Last month UN members met once again to live the good life for a few days and push for the unlikely elimination of climate change. The United Nations Framework Convention on Climate Change convened COP27 in the impressive Egyptian coastal city of Sharm El-Sheik. 100 heads of state and 25,000 attendees (carbon footprint alert!) met to advocate for a “giant leap on climate ambition.”

To win “this battle for our lives,” round tables galore were held, coalitions were formed, roles for youth and even children in the crusade were created. Curiously, no actions were taken that would directly limit greenhouse gas emissions, possibly because the much-ballyhooed Paris Agreement had proved worthless, with almost no nations honoring their commitments.

This week on Hubwonk, host Joe Selvaggi talks with climate scientist and Johns Hopkins lecturer Dr. Patrick Brown about his recent paper, Human Deaths from Hot and Cold Temperatures and Implications for Climate Change, on the factors that contribute to high climate-related mortality, and those that lead to better resiliency.

Podesta photo official portrait: Source Wikipedia According to The Hill, Biden Climate Advisor Gina McCarthy will be leaving the Biden White House on September 16th.        https://thehill.com/policy/energy-environment/3625866-biden-climate-adviser-gina-mccarthy-leaving-white-house-this-month/ Enter John Podesta.  This is the latest installment of someone in the Biden administration with no experience for the position, getting a new job.  If […]

I love history and historians. Not all, but many, like my friend Dr. Alvin Felzenberg, whose classes at the University of Pennsylvania or Yale University he would occasionally invite me to guest lecture. Felzenberg is the author of many terrific books, including “The Leaders We Deserved (And A Few We Didn’t).” It is an incomparable survey and grading of US presidents from George Washington through George W. Bush.

As Secretary of the US Senate, I was also responsible for the Senate’s Historical Office, ably led during my tenure by the legendary Dr. Richard Baker and later by Dr. Don Ritchie. He gave me the best US Capitol tour I’ve tried replicating for almost 30 years. You’ve likely seen both remarkable historians on the networks.

Have you had the Climate Change Casual Conversation? I have had it three times with three different people, involuntarily, over the last two months. And I do not have a lot of casual conversations because I generally keep to myself.

The first one happened in an AT&T phone store. I was sitting next to an elderly lady and she turned to me and declared (politely) that we are doing things to ruin the planet. She did not mention climate change but I knew what she meant. Maybe she thought I would ask her what she did mean, but I did not want to hear the boilerplate climate “emergency” garbage that is so ubiquitous today.  I did not respond though in retrospect I should have mentioned that her cell phone contained rare earth metals and that extracting them from the ground was hurting the environment. But I didn’t. It was a casual conversation after all.

Does anyone else think that one of the forcing functions of the 100K year climate cycle is driven in part by the presence of methane hydrates.  I’m aware of the orbital dynamic explanation, but in addition to that, what if during the cooling period, sea levels recede and expose/melt enough methane hydrate to cause a […]

Book, who is a member of both the Council on Foreign Relations and the National Petroleum Council, shared his insight on energy security and what it will take for renewable resources and LNGs to really take off on American soil. While he said it is possible somewhere down the line to diverge from fossil fuels, industry and government need more pragmatism in their goals.

Oil and gas industry executives met with lawmakers recently to talk about more production and gas prices, which resulted in somewhat of a blame game.

On this week’s episode of “Plugged In,” co-hosts Neil Chatterjee, former FERC chairman, and energy reporter Breanne Deppisch discuss the top energy stories from the last week — including recent policies by the Biden administration that oil and gas companies say have tied their hands as the war in Ukraine continues and more sanctions are put on Russian energy.

“Meanwhile, the bipartisan Infrastructure Investment and Jobs Act that Biden signed into law in November includes $7.5 billion to jump start the president’s goal of having 500,000 EV charging stations nationwide by 2030. ” – Epoch Times “How many gas stations are in the United States? The figure most experts estimate is about 111,000. The […]

Rep. Jared Huffman, Democrat of California, joins “Plugged In”  hosts Josh Siegel and Neil Chatterjee to discuss a big week ahead in the House as it prepares to vote on the party’s climate and social spending bill.

He urges the Senate to keep intact the House’s version of the Build Back Better Act because, “we are late in the game and need to hurry up and get this over the finish line.”

This week on Hubwonk, host Joe Selvaggi talks to Prof. Roger Pielke, Jr., Professor of Climate Science at the University of Colorado, about the widening gap between the catastrophic predictions proffered at the COP26 Climate Change Conference in Glasgow, Scotland, and the less dire observations contained in the UN’s own recent IPCC report.

Daniel Yergin, vice chairman of IHS Markit and Pulitzer Prize winning author of The New Map: Energy, Climate and the Clash of Nations, joins “Plugged In” hosts Josh Siegel and Neil Chatterjee to discuss the energy crisis occurring in Europe and Asia and how that should inform discussions at the U.N. climate summit in Glasgow.

Former Republican Rep. Carlos Curbelo of Florida, an original GOP climate champion, joins “Plugged In” hosts Josh Siegel and Neil Chatterjee to discuss his party’s “evolution” on climate change and why he thinks it can do more.

Curbelo also predicts a “big” policy solution on climate change will emerge in Florida, where residents are already “living” the effects of a warming planet.