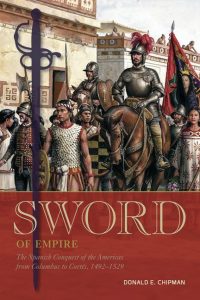 The European discovery of the Americas and the subsequent colonization of that land by Europeans was the most consequential occurrence of the last millennia.  Two men prominent in that discovery’s opening events were Christopher Columbus and Hernando Cortés.

“Sword of Empire: The Spanish Conquest of the Americas from Columbus to Cortés, 1492-1529,” by Donald E. Chipman, tells the story of these two men. It explores the events of the first forty years of the Spanish acquisition of the American possessions.

Columbus opened the Age of Exploration. Cortés opened the Age of the Conquistador, where Spanish freebooters conquered the great empires of North and South America. Together the men form a set of bookends in the story of the Americas. Columbus departed the New World for the last time in 1504, dying in 1506. Cortés arrived at Santo Domingo, the colony founded by Columbus in the year of Columbus’s death.  This allows Chipman to follow the thread of the opening years of Spain’s American adventures using these two as his focus.

I should be judged as a captain who went from Spain to the Indies to conquer a people numerous and warlike, whose manners and religion are very different from ours, who live in sierras and mountains, without fixed settlements, and where by divine will I have placed under the sovereignty of the King and Queen our Lords, an Other World, whereby Spain, which was reckoned poor, is become the richest of countries.—Christopher Columbus

You may judge him more harshly than he judged himself. Or maybe more leniently. But however you do it, happy Columbus Day.

“Let those who are fond of blaming and finding fault while they sit safely at home ask, ‘Why did you not do thus and so?’ I wish they were on this voyage. I well believe that another voyage of a different kind awaits them, or our faith is naught.” — Christopher Columbus, Lettera Rarissima to the Sovereigns, Fourth Voyage (7 July 1503), quoted in Admiral of the Ocean Sea, by Samuel Morison

Columbus’ choice of language was more genteel and diplomatic than Morison’s paraphrase of his sentiment: in other words, they can go to hell. Teddy Roosevelt echoed the sentiment more than 400 years later in his “man in the arena” speech. Men of great accomplishment have surely been frustrated by their critics throughout the ages. Columbus was well aware of his contemporary critics, but he could not have known how many people would be denouncing him more than 500 years after his death. I find it reassuring that he anticipated all the elite progressives and liberal arts students who protest any recognition of his accomplishments, while enjoying the relative safety and comfort of modern life. And it’s a fitting rejoinder for many people today who write tweets or columns, but never shoulder the burden of taking action.

OK, I’m a day late (as a new retiree I’m probably a dollar short too), but I was just reading a Wall Street Journal Best of the Web column (possibly behind a paywall) on the trend of city and state governments to ditch Columbus Day and replace it with “Indigenous People’s Day.” Although the column […] “Christopher Columbus’ legacy of extreme violence, enslavement, and brutality is not in dispute. Nor is the suffering, destruction of cultures, and subjugation of Los Angeles’ original indigenous people, who were here thousands of years before anyone else”.