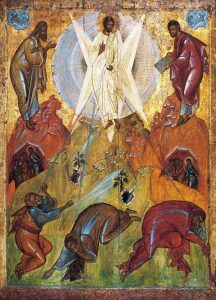 by Theophanes the Greek

Now after six days Jesus took Peter, James, and John his brother, led them up on a high mountain by themselves; and He was transfigured before them.  His face shone like the sun, and His clothes became as white as the light.  And behold, Moses and Elijah appeared to them, talking with Him.  Then Peter answered and said to Jesus, “Lord it is good for us to be here; if You wish, let us make here three tabernacles: one for You, one for Moses, and one for Elijah.”  While he was still speaking, behold a bright cloud overshadowed them; and suddenly a voice came out of the cloud, saying “This is My beloved Son, in whom I am well pleased.  Hear Him!” And when the disciples hear it, they fell on their faces and were greatly afraid.  But Jesus came and touched them and said, “Arise, and do not be afraid.”  When they had lifted up their eyes, they saw no one but Jesus only.  Matthew 17: 1-8, Orthodox Study Bible (OSB), 2008.

I write a weekly book review for the Daily News of Galveston County. (It is not the biggest daily newspaper in Texas, but it is the oldest.) After my review appears on Sunday, I post the previous week’s review here on Sunday. Book Review Eastern Orthodox Christianity Explained By MARK LARDAS Preview Open