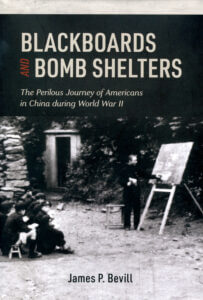 Paul Springer grew up in New Jersey during the 1920s and 1930s. A smart kid, he graduated high school at 16 in 1934 and worked at a bank. In 1937 he won a full scholarship at Ivy League Yale. Paul wanted adventure. He wanted to travel.

“Blackboards and Bomb Shelters: The Perilous Journey of Americans in China during World War II,” by James P. Bevill, tells what happened next. Yale sponsored the Yali Middle School in Yuanling, Hunan Province in China. It taught in English and Chinese. Every other year Yale sent three Yale graduates to teach there. During his senior year at Yale Paul was invited to apply for one of the positions.

He applied, and with two other Yale graduates sailed to China in July 1941. It was an opportunity to satisfy his dreams of travel during an age when this was rare. While The US was still at peace, China had been at war with Japan longer than Paul had been to Yale. He knew he was entering a war zone. His first-semester teaching at Yali Middle School was punctuated by Japanese air raids. “Different times demand different actions. Had I been born in Ancient Egypt I may well have advocated for change, even radical change. But modern times require shoring up the Old Moral Order.”– Russell Kirk

If you can, for just a moment pull your mind from Pharaoh Kirkses II and his sartorial choices, and contemplate his point. When asked to consider the conservative novelist, we normally choose from a set cast of characters; Evelyn Waugh, J.R.R. Tolkien, Allen Drury, G.K. Chesterton, and Aleksandr Solzhenitsyn. They represent the bulwark, the voice that stands loudly astride history yelling stop and portrays old values and mores with humanity and passion. Rarely do we stop to consider the novelist that finds those values buried beneath the deep layers of their own modernity, and by showing only faint glimmers argues for their modified return. Two novelists separated by birth and an ocean, Ma Jian and Walker Percy, provide powerful examples of the adapted conservative novelist and his worth.

“The carbine lies across my lap. Just below the cloverleaf, in the ruined motel, the three girls are waiting for me.” Dr. Thomas More, the narrator of Love in the Ruins, is not a well man. He drinks too much, wanders in the dead of night through malarial swamps, and lusts after every woman he can find, just for a moment without his dead daughter and gnostic spouse. In Dr. More there is none of the saintly debauchery of Sebastian Flyte or even the simple sinfulness of Wormwood’s ward, he is a funny and fallen man fully conscious of the beauty he is slowly losing a drunken grip on. Unlike the more famous Thanatos Syndrome, which has been accused even by Percy fans of being preachy, Love in the Ruins thrives on its subtlety, on the guilty pleasure that is watching the moral deterioration of Dr. More which expresses itself in jabs at Commonweal, George Wallace, and the prosperity gospel. Dr. More wishes, it grows clear as the novel goes on, to be faced with the simpler choice of Thomas More, to sacrifice himself to martyrdom and be done with a society that refused to allow old values to adapt or even exist.