A lifelong fascination obsession with all things British can easily be traced back to my early childhood when I read The Wind in the Willows by Kenneth Grahame. My bookshelf still holds the copy I received as a Christmas gift in 1975. 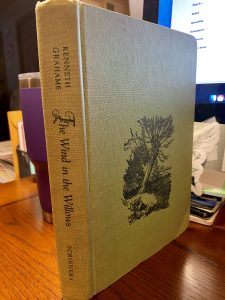 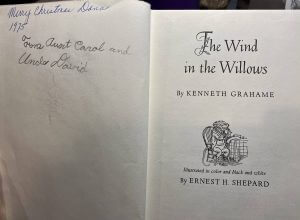 I was astonished to stumble across this picture. A Golden Book Gown! Apparently it uses 22,000 square inches of the shiny material that binds the “Little Golden Books.” You can read more here. Imagine what the publishers of the original dozen titles in 1942 (including The Poky Little Puppy) would say if they saw this […] “Mr. Baum did his best to answer all the letters from his small earth friends before he had to leave them, but he couldn’t answer quite all, for there were very many. In May, nineteen hundred nineteen, he went away to take his stories to the little child-souls who had lived here too long ago to read the Oz stories for themselves.”
— Cordially, your friends, The Publishers

This statement was part of the preface to L. Frank Baum’s last book, Glinda of Oz. The publishers were hoping to comfort all of those children who awaited Baum’s books with excitement and anticipation; this last book was published after his death in May 1919. Although Oz stories have continued to be written, mostly by Ruth Plumly Thompsen, I was never able to fully switch my allegiance from his magical writing to hers.

I was an avid fan of Baum’s and remember lying on my bed as a child with the sun resting on my quilted cover, my head propped on my hand as I read each of his stories with wonder and joy. He wrote 14 books for the Oz series, and many people know of Baum as the writer of The Wonderful Wizard of Oz. I had never seen a copy of the first and original book that had the illustrations of W.W. Wenslow; it’s just as well because I know that he wouldn’t have captured my imagination the way John R. Neill did in the subsequent books. Neill’s black and white drawings and colored plates were delicate and ethereal, so much so that later in life I purchased some of the early books strictly for the illustrations.

My daughter will soon turn five and I haven’t read Brown Bear, Brown Bear, What Do You See? to her in a while. A few months ago she saw it in the book basket at her ballet class and it triggered the trouble I had with it. For those unfamiliar with it, it starts out […]

Growing up I’ve always heard baseball described as “America’s pastime.” As a boy, I didn’t really understand it. In the seventies, baseball was one sport among several in the year, and so I just understood it to mean Americans love baseball. Later years proved that not to be the case, so I remained confused until I learned of its earlier days, when just about darn near everyone played baseball. There were the major league teams we know today, but there were semi-pro teams, local teams, local clubs, baseball games for all ages and all types and just about everyone took part. In the past year my two-year old girl who loves books found two stories of unique players I’d never heard of in the history of baseball.

The first book, Queen of the Diamond, tells the story of Lizzie Murphy, a ball player in the early twentieth century. Her father played on a team, and taught his kids to play. The story follows this plucky girl who loves baseball so much she pursues opportunities to play, even getting on a semi-pro team. Sheer determination and skill work in her favor and she plays before crowds. Interestingly, it’s her father and brother who encourage her in the early days. Her mother is constantly worried about how unladylike playing baseball is, but her father and brother both recognize Lizzie has talent.

So my reading tends to be curtailed by a busy life. When I do get free time, I tend to pick up my tablet for a game because it’s more interruptible, but then proceed to ignore the world because Dad is a Contradictory Man (my kids come by their contrariness honestly, I tell ya.) So […]

My subscription to BookBub has been worthwhile, despite the fact that it means another daily update in my inbox. Often there are one or two short-term deals that are potentially enriching reads, and I’ll purchase them if I have some Amazon credit. Some of the free book offers have been good, or at least warrant a browse […]

In Part II of this series, I detailed further helps for choosing books to read to small people in your life and began listing children’s book authors and works worthy of your time. I have several categories yet to list, and I want to conclude with how you can build a significant library of children’s books […]

In Part One, I gave some guidelines for choosing books to read to the younger crowd, ages infant to about six.  After reading this installment, filled with specific titles, you will be ready to go into  a library or bookstore and expertly select enough winning material to get you established in a rich read-aloud tradition […]

If I hadn’t loved reading books as a kid, I doubt very much I’d be writing children’s books now. I always loved TV and movies and video games didn’t come along until my adolescence.  But books provided the best vicarious adventures and escape. Happily, I found a wonderful wife who also loved to read as […]

How many public elementary school libraries will order copies of this? How do you describe liberty to a 7-year-old? Should your preteen care about the government? Are your kids learning about proper political principles in class? Preview Open

The Evolution of a Society: From Men to Laws
The Ricochet Audio Network