Because many staff members, over 600 in the Chicago area, view public schools as a giant singles bar where they can speed date and find that fourth grader in just the right sassy outfit. And you don’t want a minor who doesn’t know what to do in the sack, now do you?

Chicago is the only report I’ve seen, but I’m sure it’s not the worst.

On the radio this morning I heard Keith Pekau say something shocking. In his race for IL 6th congressional district he said he actually won the part of his district comprised of Chicago and Cook County, but the area he lost was DuPage County.  That makes some sense. My part of Chicago (undoubtedly one of […] 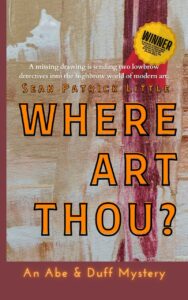 Abe Allard and C. S. Duffy are private investigators in Chicago.  Not the glamorous investigators of movies and novels, or even noir detectives of mysteries. They do research for lawyers, background checks for corporations, and track unfaithful spouses.

“Where Art Thou?” by Sean Little, takes the fictional pair out of their ordinary paths. They are hired to investigate an art theft. Their wealthy client, Geo McMahon, had a sketch stolen.

McMahon collects art. His home is filled with valuable artwork, including some worth millions. Despite the security he has, a thief was able to penetrate it and steal a piece of art. But the thief only one piece, a hyper-realistic sketch by an up-and-coming black Chicago artist. It is worth very little. It is not even what the artist was known for prior to his overdose death. While he did some hyperrealism early in his career, he was best known for his abstracts. McMahon wants to learn why that particular piece was taken.

There has been some pushback, of late, against the notion that California has become a one-party dystopia of decadence and dysfunction where dropping a BM in the street is legal but plastic straws are not. Maybe it ain’t so bad, because there are still some nice restaurants that you can eat it, provided your papers […]

Jim & Greg welcome the return of in-person schooling to Chicago after a four-day hissy fit from the Chicago Teachers Union. They also sigh as President Biden reportedly makes no progress in trying to deter Russian military action in Ukraine. And the Biden administration gets caught flat-footed again as out supply chain problems grow. 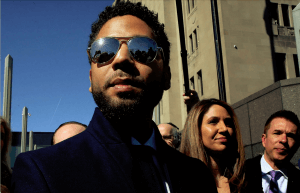 After a quick review of Thursday’s special podcast, Jim and Greg wince as the nation suffers the worst inflation crisis in nearly 40 years. They also applaud the Chicago jury that convicted actor Jussie Smollett of fabricating a hate crime and making false reports to police. And they throw up their hands as Dr. Fauci says you’ll soon need a third shot to be considered fully vaccinated and Pfizer’s CEO is already talking about a fourth shot.

I’ve been reliably informed by many thoughtful, “principled conservatives” that where employer prerogatives and individual rights are in conflict, the former should prevail. If an employer mandates employees to be vaccinated under penalty of termination, then the employer is exercising its prerogative, and the employee must choose between jab or job.

So, what happens when an employer orders an employee to have an abortion? This is not a hypothetical.

The folks at Second City Cop are back, if in a limited way.  They are a great source for insight into policing in the USSA today.Lets hope they manage to avoid being cancelled again by the Hive Mind. Second City Cop Addresses Chicago   Preview Open

Join Jim and Greg in being relieved that the four days of propaganda known as the DNC are finally over. They also discuss Joe Biden’s speech and why he would not be a unifying figure on virtually any policy. And they hammer Chicago Mayor Lori Lightfoot for barring protests on her block while showing little regard for other neighborhoods.