I wrote last week about the troubles plaguing Willis and how we should remember his career. Well, it’s my job as a film critic to help along that remembering: Here’s my essay at Law & Liberty, focusing on Die Hard: With a Vengeance (1995), the third installment in the franchise, trying to show that action movies were very serious about the threats to the American regime–prophetic about financial crisis and terrorism both–the need for citizen virtue, and the dangers of arrogant elites who don’t quite represent the people, but don’t quite master events, either. Indeed, action movies are the proper thematic preparation for the populist politics we’ve all lived through since 2016, we just didn’t take them seriously because we like popcorn too much, I guess…

Also, I talked to my pal Scot Bertram at Radio Free Hillsdale about Willis’s career in the ’90s, really starting with Die Hard. Scot comes prepared with questions that get at the important themes, so, on the one hand, the chat turned out to be longer than we had planned, but, on the other, you really get in concentrated form something that would have been a series of reviews, or a long-form profile in an intellectually pretentious magazine. You can listen to it here: 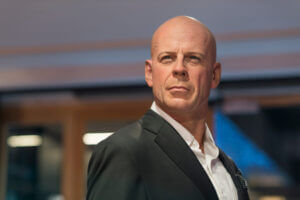 So, there’s bad news today. Bruce Willis’s family announced to the press his retirement from acting, after a diagnosis of aphasia; who knows how bad his health is but, at 67, his career is over. In our strange age, the news came as an Instagram post by his daughter. I suppose the press is just as dead as Hollywood, so it makes sense to go to social media, but in the context, it’s one more baffling thing for the millions of fans, learning about life, the body, and mortality in the ghost world of the internet.

We are stuck with all these contradictions: It’s there in a personal post, but it’s spreading all over the world—it’s going to be recorded forever by computer memory, but it’s likely to be forgotten instantly by most people who glance at this bit of news. So, there is an end to all that — not even fame has any power over us anymore.

Willis is the last actor to have something of the combination of manly charm, comic talent, a few famous roles, working with remarkable directors and writers, and the luck that makes a star. The best we can do with an actor we admire is to enjoy his work and learn from his portrayals of character and enactments of story. If we learn about our society from the movies, we are likelier to remember and be grateful.

My friend Pete Spiliakos and I are doing our 10th podcast and it’s about a movie on its 30th anniversary. Die Hard is well-loved and little talked about — we’re here to remedy that. We discuss the great everyman performance Bruce Willis put in and how director John McTiernan crafted the entire movie around him. With remarkable coherence, you get a view of the working class moral realism and virtues of American men and, from that perspective, of the arrogant incompetent of all sorts of institutions: Corporations, media, government, police, etc. We also talk at length about the social changes that have made action movies almost inconceivable and replaced working class heroes with oligarchs and mythical aristocrats, who alone seem to deserve our attention and billions of box office dollars… This is what our Middlebrow series is all about: How movies reflect society and also reflect on our ideas and beliefs.

One of our family’s Yuletide traditions is to watch “Die Hard” on Christmas Eve Eve. Okay, so it doesn’t exactly hit the spot for “Peace on Earth” but if you wanted to really stretch things, you could say it’s an Incarnation Parable. Or you could say with dark humor the film blows stuff up real […]

I choose my friends carefully. Or, at least, I thought I did.
Dr. Bastiat · 48 Likes

The lights are going out in Europe
RushBabe49 · 26 Likes

I’m in the Meme for Love
Mark Alexander · 21 Likes

We Can Never Go Back
JennaStocker · 15 Likes

What Was the Purpose of the Raid?
The Ricochet Audio Network

The Transgender Transmogrification of Everything, Including the Past
The Ricochet Audio Network