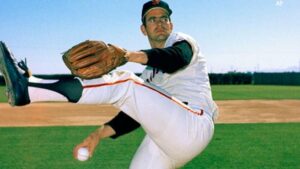 Gaylord Jackson Perry was born on September 15, 1938, to Evan and Rubi Perry in Williamston, North Carolina. Perry had two siblings a younger sister Carolyn and an older brother Jim. The family farmed a small plot and their father, who pitched semi-pro baseball, passed along his sports knowledge to his athletic sons. Both sons took the same general path with Gaylord following Jim by two or three years – starring in basketball and baseball in high school (both brothers turned down college basketball scholarship offers), both attended a local college for a year or so pitching for the baseball team before signing professional baseball contracts as pitchers and making their way to the majors within several years.

Gaylord signed a professional contract with the San Francisco Giants in June 1958. He started out in the low minors and worked his way up the minor league ladder to the parent club in 1962. He bounced up and down between the majors and Triple A for a couple of years before sticking for good in 1964. Coincidently or not, 1964 was also when he learned how to throw a spitter from journeyman pitcher Bob Shaw. More about that a bit later.

I am the middle of three brothers. Of the three of us, I am the dumb one.

Don’t get me wrong. I am not stupid. Based on my academic achievements, standardized test scores, and intellectual accomplishments, my IQ is somewhere in the 130s. That is smart. Whip smart. Smarter than 95% of people. Smart enough to be a rocket scientist. Or at least the space navigation software engineer I was for the better part of three decades. If most people are 40-watt bulbs, I am 75-watts.

And [Esau] said: ‘… he hath supplanted me these two times: he took away my birthright [bechor]; and, behold, now he hath taken away my blessing.’ What is this “birthright” that Esau is talking about? The Torah tells us that Yaakov bought the birthright from Esau for a bowl of food, and that Esau spurned […]

Jesse and Andy: Rest of the Meme
Mark Alexander · 25 Likes

Korematsu and the Court of History
Dissed

WTH is Happening with the Chinese Protests? Dan Blumenthal on Backlash Against the CCP’s Zero-Covid Policies
What the Hell Is Going On