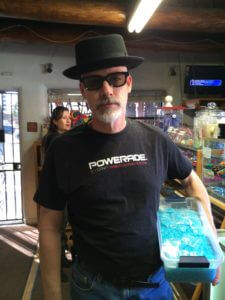 In 1982, I was an Albuquerque Police Department (APD) recruit working with a training officer (TO).  One day, we were dispatched to a hit-and-run crash.  The victim had a description of the vehicle, a very distinctive description of the driver, and a license plate number.  We ran the plate through the state Motor Vehicle Division, and it came back to the same make and model described by the victim, belonging to a Jimmie Joe L____.

We went to the address from the registration and found the vehicle in the driveway.  It exactly matched the victim’s description and had damage consistent with the crash.  The house, or I should say the property, was very strange.  There was an eight-foot wooden fence around the entire border except the driveway.  We walked past the vehicle and knocked on the gate, receiving no answer.  As we were walking back down the drive, one of us looked into the vehicle and saw a revolver lying in plain sight on the front seat.

Both front windows were open, so one of us simply reached in and picked up the weapon.  The gun was loaded, but the most distinctive thing about it was a strong chemical smell emanating from it.  Neither I nor my TO recognized the smell at the time.  We took the gun. “Scalability” problems arise in the context of certain kinds of manufacturing and industrial processes, as well as computer databases, start-up and growth-stage businesses, and some other kinds of complex systems. You can think of scalability in terms of Breaking Bad, which was basically a show about the problems and challenges of scalability. A high school chemistry teacher and his junkie wastrel former student attempt to scale up their boutique, small-batch blue meth business and turn it into a giant multinational conglomerate, while grappling with the attendant problems of production, distribution, administrative, financial, geographic and moral scalability. Hilarity and horror — in equal measure — ensue.

I don’t pretend to be an expert on this subject, but it seems to me that analogous problems of scale come up a lot in social and political contexts. Clearly, some things in society work well on a large scale, while others don’t, and it would be helpful to know why and how to distinguish the one kind of thing from the other. For example, in an earlier post I observed that — though I am more or less an atheist, and that it seems to work okay for me — I would prefer not to live in a society of atheists, because the large-scale application of the atheism principle leads to nasty social outcomes and is destructive of the kinds of political values I like.

Unfortunately, there is no simple rule that tells us whether a system is or is not scalable; one has to look closely at its inner workings. But maybe there are some patterns to point us in the right direction.