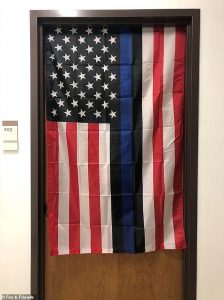 In deference to our traditional heroes, I have to say that the man I’m going to tell you about is not one of them. He hasn’t put his life at risk (although some might disagree, given what he is doing); he hasn’t faced bullets (but he has dodged the slings and arrows of the woke community). And he sets a great example, especially for professors in the universities, for fighting back. His name is Prof. James Moore.

Prof. Moore, who teaches engineering and policy at USC in Los Angeles, has the audacity to hang a pro-police flag on the outside of his office door. The university newspaper, the Daily Trojan, reported the complaint of a student regarding the display:

‘This is an inappropriate and unnecessary symbol to have on an office door where USC is, within the last year or two, trying to have a much broader diversity initiative and to be inclusive, especially in the STEM area,’ one USC graduate student told the school newspaper.

I’ve been puzzled that while the media, corporate America, and others are hyper-focusing on the relationship between law enforcement and the Black community across much of the US, it’s all been mostly one-side; focused only on what many in the black community have experienced and feel. And now, it’s morphed into “defund the police.”

The stories and “the conversation” are important. But what about the other side – the people who protect and serve our communities?

Press Secretary McEnany put the pictures of police who have been killed this year in the faces of the White House press corps. She hammered the media on their wilful misrepresentations again and again even as they tried talking over her. “There has been a lot of misreporting.”

At the beginning of the briefing, she remembered a retired police captain, Captain David Dorn, a black man who was killed as he tried to prevent looting. Yes, there is a video of his murder and no I will not link it here. She closed the briefing by calling out the media for their silence on the killing of persons of color who were police officers. She did so without using the words “persons of color” or saying “all lives matter.” She simply told their stories as she put their photographs in the public eye. The jackals were not a bit contrite, howling another leftist attack line as she walked out.