Prime Minister Benjamin Netanyahu declared himself victorious in the 2019 general election Tuesday night, as updated exit polls and early results showed him with a clear path to forming a new government.

What? Elect the 120 Knesset members, who will determine which 61+ Knesset members will select the Prime Minister and run the country (in conjunction with the Deep State, the oligarchs, and the media).

Populist winds took down the Clintons and are now taking down Merkel, Macron, and May. Bibi, who is cruising to reelection (assuming he can stay out of jail) doesn’t have to worry about being taken down by nationalist populist insurgents because he is the nationalist populist insurgent who took down the establishment. He just did it earlier. Bibi was Trump before Trump.

Bibi and Trump have some similarities in style and character.

Watching Bibi Netanyahu addressing the UN’s General Assembly always makes me want to cheer. Two years ago, Israel alone opposed the horrible Iranian nuclear deal that the US negotiated and declared Israel would defend itself and that the world was making a terrible mistake. As Iran continues to develop its nuclear program and the IAEA appears emasculated, Bibi was back on Thursday to tell them: 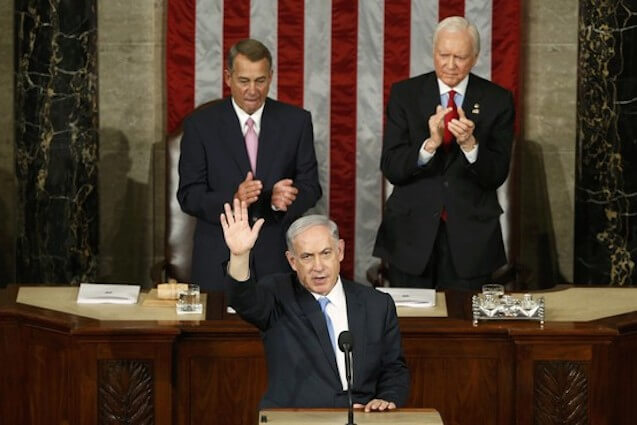 The most significant event that happened today may not be Benjamin Netanyahu’s speech to Congress, but the response from Democrats — or non-response. Watching how many now join with Republicans to ask the Obama Administration to rethink its negotiations with Iran will tell us a lot about the party’s state of mind — not just about Israel, but about America in the world today.

The signs aren’t hopeful. The last count before the speech was that some 55 Democratic members of Congress had decided to boycott the event. Some were the usual progressive suspects, like Elizabeth Warren and Al Franken. Some who had announced they would boycott the speech decided at the last minute they wouldn’t, like New York’s Charlie Rangel and Florida’s Debbie Wasserman Schultz. Her non-attendance would have presented the truly bizarre spectacle of a Jewish Democrat speaking at AIPAC one day, then skipping, in protest, a speech by Israel’s prime minister the next.