This week on “The Learning Curve,” Cara and Gerard are joined by Jim Blew, the assistant secretary for planning, evaluation, and policy development at the U.S. Department of Education. Assistant Secretary Blew shares lessons from leading and implementing K-12 public education reform efforts in often contentious policy environments, and the unique challenges of the current partisanship and gridlock in Washington, D.C. He describes Secretary DeVos’s courageous work on behalf of public and private school choice, as both a public official and private philanthropist, and why it caused such a stir from the national teachers’ unions and defenders of the status quo in Congress. The discussion concludes with a focus on the D.C. voucher program, the most successful federally-funded K-12 private school choice program ever established, its future prospects, and the outlook for private school choice programs across the country.

Stories of the Week: The New Hampshire state legislature will move forward on the first phase of a $46 million federal grant-funded initiative to double the number of charter schools, after Democratic lawmakers voted against the grant last year. Lily Eskelsen García rose from school cafeteria worker to president of the National Education Association – will President-elect Biden choose her as the next U.S. Secretary of Education? 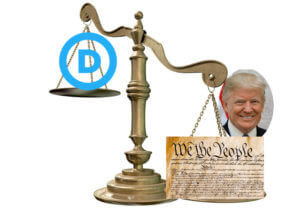 Betsy DeVos is once more in the sights of the House Democrats—and it’s going to get uglier with Democrats controlling the House. I’ve written about Secretary DeVos in the past, and because there is so much at stake with the state of education in the U.S., I’ve no doubt that the Democrats will do everything in their power to discredit her, remove her, and try to re-instate the biased and ineffective Obama administration and Leftist policies. This post will review some of the attacks on DeVos and the Department of Education, and why it is such a serious matter for this country, for education and for the rule of law.

The accusations against DeVos are many, including accusations of conflicts of interest of her staff, attacks on her brother, attacks on her expenses, and attacks on her motives. The two most important issues, I believe, are her revisions to the Title IX requirements and criticisms of the Department regarding student loan management. I’m not addressing conflicts of interest, because although the current brouhaha includes this criticism, most of the allegations that I could find are nearly two years old; I assume they didn’t rise to the level of removing her, or they were resolved. These accusations were likely just another attempt to discredit a Trump cabinet member.

In her efforts regarding Title IX to ensure that both the accused perpetrator and victim are fairly protected, DeVos issued new guidelines for formal complaints.

This week on Banter we’re joined by Mike McShane for a discussion on education reform in the Bush and Obama administrations. Dr. McShane is the director of national research at EdChoice and a former research fellow in education policy studies at AEI. He cohosted a public event on the history of education reform in the Bush and Obama years, which featured a keynote address from Secretary of Education Betsy DeVos. You can watch the full event video at the link below. It’s about time. Betsy DeVos, Secretary of the Department of Education, is pushing back on the shameful 2011 “Dear Colleague” letter that was sent to college campuses to intimidate them into misusing Title IX.

The principal objective of Title IX was to avoid the use of federal money to support sex discrimination in education programs and to provide individual citizens effective protection against those practices. In the case of sexual abuse on college campuses, particularly accusations of rape, the regulation has been poorly applied to possible victims and the accused alike. Secretary DeVos’s actions have been both praised and condemned.

The exploitation of this regulation was especially egregious during the Obama administration. The infamous “Dear Colleague” letter was designed to intimidate the colleges into compromising the adjudication of sexual assault cases:

The Betsy DeVos nomination proved to be the most contentious; the hill Democrats have chosen to die on. Why? Because it’s about the future:

Betsy DeVos has the opportunity to do so much good and bring to an end so much Education departmental overreach and abuse of power. The Democrats were desperate to prevent this from happening. It’s all about the future.

Lawrence Krauss, professor at Arizona State University, recently opined in The New Yorker that the Trump administration is declaring a “war on science.”[1] With the nomination of Betsy DeVos as education secretary, Krauss foregrounds education as part of this battle: DeVos is a fundamentalist Christian with a long history of opposition to science. If her […]

Over the summer, the New York Times published an error-ridden piece on Michigan’s charter schools that it has yet to retract. Now, the NYT is doubling down with another piece adding new errors to old ones. The errors begin in the opening sentence:

Few disagreed that schools in Detroit were a mess: a chaotic mix of charters and traditional public schools, the worst-performing in the nation.

This is editorializing thinly veiled as “news.” In fact, lots of experts disagreed with that statement. The original NYT piece received a wave of criticism from national and local education policy experts, charter school organizations, and other journalists. As I explained at the time, the central premise of the NYT’s takedown on Detroit’s charter schools was an utter distortion of the research:

In a perfect world, the President-elect would dissolve the Department of Education, salt the earth, and erect a charter school in its place. But a close second is nominating a Secretary of Education who will take on the meddling DC bureaucrats and ossified teachers’ unions. Trump did just that today by naming school choice enthusiast Betsy DeVos to the post.

“Under her leadership we will reform the U.S. education system and break the bureaucracy that is holding our children back so that we can deliver world-class education and school choice to all families,” Mr. Trump said in a statement.

Ms. DeVos, a Republican mega-donor and chairman of the American Federation for Children, vowed to help Mr. Trump remake the education system.

For Love of the Game
JacobHyatt · 19 Likes