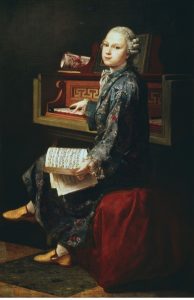 “Neither a lofty degree of intelligence nor imagination nor both together go to the making of genius. Love, love, love, that is the soul of genius.”
— Mozart

“In art there is Leonardo da Vinci, in literature there is Shakespeare, in music there is Mozart.”
— Itzhak Perlman

In this age of political unrest and divisiveness, one question stands out: Why is Mozart great?

December 16 is sometimes attributed to be the birthday of Ludwig van Beethoven, perhaps the greatest musical composer who ever lived. There’s no official birthday since there is no record. There is a record of him being baptized on the 17, and so they assume he was born the day before. [I like to think he was born two days before actually, the 15, and so it would make him born on my birthday!] It’s not just any birthday; it’s the 250th anniversary of his birth and should be a moment for reflection.

When one thinks of Beethoven, one’s thoughts have to go toward just how great a composer he was. We know of his greatness: the nine symphonies, the five piano concertos, the one violin concerto, the sixteen string quartets, the countless sonatas of various instrumentation, and so on, all of the highest craftsmanship and sublimity.

A British fellow named Paul Barton lives in Thailand where his wife runs an animal sanctuary, Elephants World, for “old, sick, abused, retired or rescued elephants.” As their website says, “Most of our elephants have lived very hard lives and they come here to retire in peace.” Some years ago he began playing his piano to the elephants, some of whom were in chronic pain or blind or both.

Beethoven for years had wanted to set Schiller’s “Ode to Joy” to music. That he finally and brilliantly succeeded near the end of his life confirms the strength of his spirit despite near total deafness. (The Heiligenstadt Testament provides some insight.) I chose the 4th movement not because it represents the novel use of voices […]

Today is the 244th anniversary of Ludwig van Beethoven’s birth, an occasion you may wish to celebrate by watching the video below of a performance of his 9th Symphony featuring Sir Georg Solti, Jessye Norman, and the London Philharmonic. I pity the man who is unmoved by Beethoven’s music.