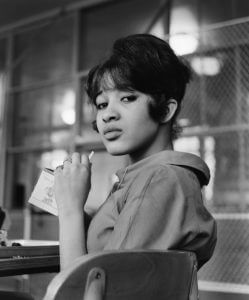 Singer Veronica Greenfield, better known by her stage name Ronnie Spector, has died. I won’t pretend to be an expert on her life or career, but I can tell you this: Presenting the Fabulous Ronettes Featuring Veronica has not been bested by any pop music since. I don’t think it can be. Songs like “Be My Baby” and “Walking in the Rain” are a perfection of the form, though it would be wrong to talk about the music of The Ronettes only in terms of pop. It’s some of the greatest American music, period.

The Ronettes, as well as most of the notable girl groups of the ’60s, owe much of their success to producer Phil Spector who Ronnie married in 1968. All the producing genius in the world would’ve meant zilch had Phil not been working with singers of such immense talent as Ronnie, her sister Estelle, and their cousin Nedra Talley. As lead singer, Ronnie is the star of those records. Her voice was as powerful as it was beautiful, the envy of angels. She would shine no matter who was in the studio with her. Phil was lucky to have her. Unfortunately, though unsurprisingly in light of his later conviction for murder, Phil was an abusive scumbag. They divorced in 1974. She kept the surname for business purposes.

Her post-Ronettes career didn’t bring the same financial success, but artistically she was as vibrant as ever. Of particular note to me was She Talks to Rainbows released in 1999. The EP was produced by Joey Ramone. Girl groups were a major influence on the Ramones whose divisive End of the Century was produced by Phil Spector and featured a cover of The Ronettes “Baby, I Love You” (read the Wikipedia article for more anecdotes about Phil’s overbearing, horrific behavior). She Talks to Rainbows sees Ronnie return the favor, covering two Ramones tracks, as well as tracks by Johnny Thunders and The Beach Boys. In the coming days, you’re going to see a lot of people posting “Be My Baby”, but for me, Ronnie’s crowning jewel is this eponymous song, a cover that turns a forgettable song into a masterpiece:

Recreating Worlds That I Have Lost
She · 19 Likes