Click here to listen to the podcast! On this episode of The Resistance Library, Sam and David discuss the Battle of the Bulge. Preview Open 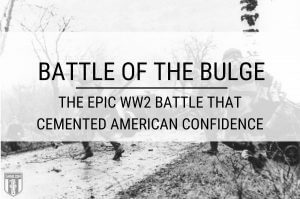 When we think about American GIs in the European theater of World War II, much of our image comes from the Battle of the Bulge. Named so because of the distinctive “bulge” shape of the front lines, this is where so many American men laid down their lives on fields of frozen mud in France.

What Was the Battle of the Bulge?

The Battle of the Bulge was the result of Hitler’s last dying gasp lashing out against the increasing pressure of the Allied forces in France. Hitler’s goal was to drive a literal and metaphorical wedge between the United States and the United Kingdom.