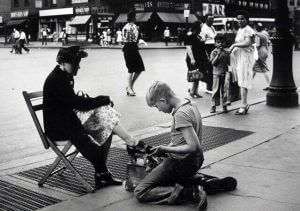 “He was dressed as if everything he wore had come from a rummage sale, except that the crease in his trousers was sharp and his shoes were shined.” — Beverly Cleary

That’s not me in the photo above.  It’s just some anonymous kid in a photo I found on Google. But it could be me.  It’s the right era and I used to look something like that when I shined shoes.  At one time, I could even bend my legs backward like that.  But there is one thing out of place:  I never had a client who dressed that well.

My clients were usually drunk.  For a few summers around 1950, Red and I, carting around our little homemade shoeshine boxes, shined the shoes of the patrons of the dive bars on Compton Boulevard near the LA River.

The physical bars and restaurants and being ordered to close in many places but the Three Martini Lunch remains open.  Come in and join us! Today, Jim and Greg react to the CDC urging Americans to avoid gatherings of more than 50 people for the next eight weeks and mayor and governors forcing bars and restaurants to close.  They also discuss the awkwardness of the Biden-Sanders debate in the midst of the coronavirus crisis and highlight how Bernie Sanders and other Democrats have pushed Biden into extreme liberal positions on energy, immigration, guns, abortion and more. And they discuss the stunning political fall of Andrew Gillum, who came less than a percentage point from becoming Florida’s governor in 2018.

This cocktail is my riff on a very old drink called a Blue Blazer, the preparation of which is usually more enjoyable than the actual taste of the cocktail. The liquid, an admixture of scalding hot water and alcohol, really is on fire, and that’s why this cocktail is challenging and somewhat dangerous to make. […] Author’s Note: Thanks to my full-time and freelance jobs, I have traveled extensively throughout the United States. I have visited every major city multiple times, and many small towns in between. For each destination, I always try to see something different. This is the first in what I hope to be an occasional series of articles about some of the uniquely American places I have been, and if possible, you should try to visit as well.

I was all set for a trip to San Francisco, when my boss told me that I was being sent to Indianapolis instead. As soon as I heard “Indianap,” I gleefully thought to myself “I get to go back to Nicky Blaine’s.” After I got the reassignment, I immediately contacted two of my best friends, Tony Katz and Fingers Malloy, who live in Indianapolis, to let them know I was coming to town. Where we were going to eat was not important, but it was naturally understood that after dinner, we were going to Nicky Blaine’s.